Where were you at nine o'clock this morning. Probably you weren't fighting the urge to smash your iPhone to bits as an application froze up, preventing you from downloading the e-mail you'd just received, giving details of the 2010 Edinburgh International Festival. But then you're not me on P-Day, the day the programme is revealed. In the past, such has been my fervour, I've actually taken the day off. This year I had to restrict myself to frantic tweeting in my breaks and picking through the PDF brochure while I wolfed down my sandwiches. 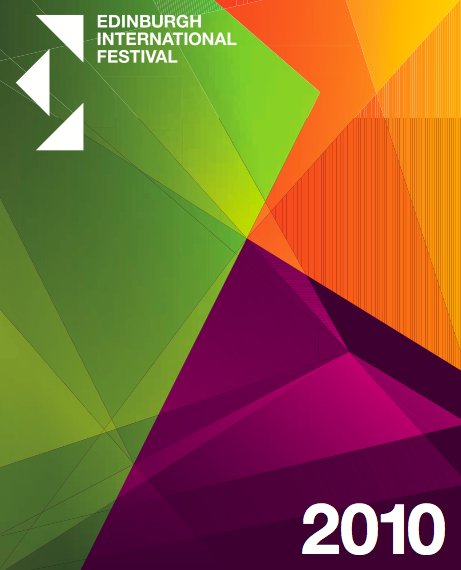 It must be said, we haven't always been totally bowled over by Jonathan Mills' programmes. Indeed, the very title of this website was a dig at his first. It is, therefore, a high compliment when I say I haven't been so excited about a launch since 2006 - a year filled with such legendary performances as the Mackerras Beethoven cycle and Rattle's visit with the Berlin Philharmonic. Last year I didn't go to a huge amount and had substantial other commitments. Even so, I didn't find myself too torn in making choices. This year I have oodles of free time, and yet, already in booking, I'm finding the need to make hard choices, the joy of not being able to go to everything you want to that is so critical to a great festival. So, what lies in wait for us this August?

If I've had one big criticism of Mills' tenure, it's been that, in terms of the big international orchestras, the programme has too often been deficient. Last year the Proms offered the likes of the Concertgebouw and the Vienna Philharmonic while we had to make do with the Zurich Tonhalle and Orchestre des Champs-Elysees. Not so in 2010. This year Mills has put together the finest lineup of any festival I can remember. We get Jansons and the Concertgebouw for two nights, including Mahler's third symphony which, to judge by what they did with the second, should be a real treat. Add to this the Cleveland Orchestra, under Franz Welser-Most, whose 2004 visit still sends shivers down my spine when I think of it: the visual spectacle provided by the almost military precision of this ensemble is a sight to see. But wait, there's more. One of the absolute highlights of Mills' second festival was the visit of Sakari Oramo and his Finnish Radio Symphony Orchestra. This time they're here for not one, but two programmes including Neilsen, Wagner and Petra Lang.

And that's without mentioning the Russian National Orchestra under Pletnev, the Sydney Symphony Orchestra with Ashkenazy and Vanska bringing the Minnesota Orchestra. It's a vintage year - no question.

We mustn't, of course, forget Scotland's fine home teams. Mackerras's concert performance of Idomeneo with the Scottish Chamber Orchestra and the magnificent Joyce DiDonato promises to be something special. Deneve should be absolutely in his element with Ravel's L'heure espagnole, while Ticciati presents an eclectic programme including a world premiere by Kevin Volans and Poulenc's concerto for two pianos. It's the BBC Scottish Symphony Orchestra's turn to do the opening concert and, in a very exciting move, James Conlon presents John Adams' El Nino.

Opera contained probably the low point of last year's festival in Actus Tragicus. This year things are looking up. Opera de Lyon kick events off with Porgy and Bess. Anyone who recalls their 2006 Weill double bill of The Seven Deadly Sins and The Lindberg Flight will surely be queuing up for tickets. Then there's Montezuma, a rarely performed work by Carl Heinrich Graun. There are, of course, a number of concert performances too. Perhaps most interesting, though, is the visit by Opera Australia with Bliss, a new opera Brett Dean and Amanda Holden. Given how allergic Edinburgh can be to new music, this is brave, doubly so given the fairly racy subject matter (which isn't always a good fit for the opera house - Powder Her Face, I'm looking at you). Still, I'm in favour of new opera and look forward to giving it a fair hearing. (In the coming weeks we hope to provide something by way of a trail from a correspondent in Australia.)

Importing any opera group is financially a nightmare, and from Australia it must be even less easy, doubtless the funding of the Australian government has helped. Indeed, one notes various groups funded by the American embassy and one wonders if tapping into foreign governments in this way has been a factor in helping to put on such an impressive array.

Unfortunately my day job means I won't get to nearly as much at one of my favourite venues as I'd like. The crop of recitalists is especially impressive this year: there's Magdalena Kozena, Gerald Finley (if you haven't listened to his recent Chandos recital disc, you should) and the exceptional Simon Keenlyside. Then there are groups like the Nash Ensemble and the Pavel Haas and Tokyo Quartets, the latter bolstered by one of my favourite local musicians, cellist David Watkin.

But it's not just about the music, though that is the main focus of this blog. My brother, who goes to much more drama than I do, reports this to be one of the most interesting programmes of recent years. Indeed, for this and many of the reasons given above, he has been cursing the fact that he'll be out of the country for all but the last week. We have Elevator Repair Service (there is presumably a nice story behind that name) bringing an adaptation of Hemmingway's The Sun Also Rises while the Wooster Group bring Tennessee Williams' Vieux Carre. Elsewhere the The Gospel at Colonus delivers an enticing fusion of art forms and The Man who Fed Butterflies mixes film and live action.

The dance programme is particularly exotic, tying most strongly into Mills' new world theme. Indeed, so much so that I'm really out of my depth and at a loss to pick out anything. For anyone who knows more than me, the comments are below. Suffice to say, glancing through, I keep seeing things and thinking 'that looks most interesting'.


Jazz and the Kronos Quartet

What's that, you say? Doesn't Edinburgh already have a Jazz festival. Indeed it does. But I was a Jazz fan long before I was a devotee of classical music; I fell in love with Miles Davis long before Donald Runnicles. So, I welcome its inclusion into the festival, primarily with the presence of Tommy Smith and the Scottish National Jazz Orchestra. Doubtless, this is in part to tie in with the American theme but I sincerely hope it isn't a one off.

An even bigger pull for many will be the presence of the Kronos Quartet. Some may baulk at the presence of works for "electric string quartet", but after all the praise heaped upon them by many people, such as @petergregson, I can't wait to get to know them. Besides, I love little more than the fusion of styles, but that's a Miles Davis fan for you.

Such blends, fusions, crossovers and bending of boundaries are, to my mind, a purpose of festivals, not to mention a means of broadening the audience and getting people to pick up a programme who might not otherwise do so. Who knows, we might then entice them in to hear Runnicles.

And so, of course, to the man himself. I hadn't forgotten, don't be silly. We are treated to him and the BBC Scottish not once but twice, first in a programme that includes Bernstein's serenade and Dvorak's ninth symphony (the new world theme again) and then, in a dream come true, the closing concert: Mahler's eighth symphony, one of my favourites and the only one I've yet to hear live. It's perfect programming too: the festival chorus was formed to sing it and, in that concert, Runnicles himself sang in the boys choir. I wonder if he knew then where he'd be now and how he feels about it. I'll know soon enough because on Sunday Where's Runnicles will be interviewing Runnicles (hopefully to be made available as a podcast, part of an exciting new development for us). (I also wonder whether the festival got the idea from my suggesting it last year, I like to think so.)

As ever the, Scottish Chamber Orchestra will play everything out with the fireworks, this year in an intriguing programme that includes Korngold, Bernstein, Waxman and Bernard Herrmann.


I've not mentioned the early music at Greyfriars, which has a strongly Latin American flavour. Early music isn't something I'm especially keen on, nor is the acoustic of the Kirk (there are plenty of better options in Edinburgh and it confuses me that Mills is so wedded to it).

If I was going to nit-pick, I'd regret that once again the Gustav Mahler Jugendorchester is absent, making this the fourth year running. Will we ever see them again? Still, with such riches, it seems churlish. We could also gripe that despite being, by one rating, Scotland's top-ranked arts blog, we weren't invited to the launch. But we're professionals here (okay, we're not, we're amateurs, but we have high ethical standards), so luckily for them that slight hasn't coloured our reportage. A more legitimate gripe is the slightly unhelpful layout of the brochure - why aren't all the Usher Hall concerts together in order? Instead, orchestras and recitals have been separated out; worse, the Cleveland and Concertgebouw are grouped together in the middle. It doesn't make much sense and isn't very user friendly.


In general, though, pretty fantastic. And a respectable number of hits with my random guesswork from a few months back, though my rock solid prediction of Dudamel has proved faulty (except in as much as we're getting an off-shoot of the Simon Bolivar). I'm very pleased my worries about the calibre of the orchestral programme have proved so completely groundless. It's also nice that they've picked up on my brother's note concerning the dates of exploration of the new world.

Not really relevant to the artistic quality of the endeavour, but the brochure looks very attractive indeed. They've opted for plain colours this year, perhaps keen to avoid one of several storms in a teacup last year. Then again, they've put orange on something that launched on St Patrick's day (doubtless it's only a matter of time before the letters flood in).
Posted by Tam Pollard at 01:51

I agree to your remark about the Mahler youth orchestra. Hopefully they will return to the EIF one day - but who knows, it seems it does not depend on them, since I hear they are present at all other major festivals. I shall never forget their opening concert with Boulez in 1997 or Abbado´s Gurre-Lieder in 1996. Perhaps 2011 will mark a change, let us hope!

Oops - how unfortunate (now corrected). Well spotted - thanks for drawing to my attention.


To the first commenter, with regard to the GMJO, you may find the comment on this post interesting: