The Usher Hall has played host to some historic concerts. One, particularly, springs to mind as I write this review. At the 1968 Edinburgh festival Giulini conducted the Philharmonia in a performance of Britten's War Requiem with the original soloists for whom the roles were written and with Britten himself directing the Melos Ensemble. By all accounts it was extraordinary (I know a few people who were there), certainly the similar recording, albeit with different soloist, made at the Albert Hall on BBC Legends is quite something.

There've been other performances since, including one with the RSNO led by one Donald Runnicles, at the 2000 Festival. This week it was the turn of Stephane Denève and the RSNO. Denève took a fairly slow view, running close to ninety minutes, but never feeling sluggish. He captured the drama of the climactic moments, but was also sensitive in the quieter ones. 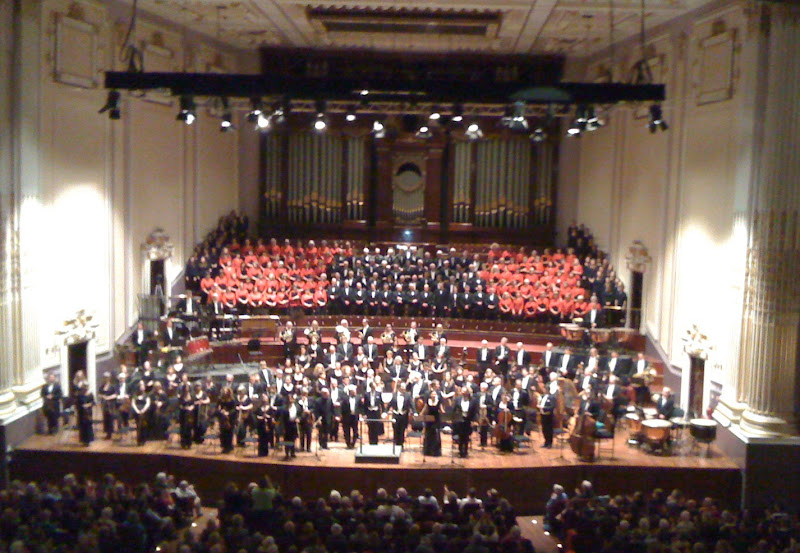 In an interesting move, he elected to conduct both the orchestra and the chamber ensemble, composed of orchestral principals and situated to the conductor's right. This didn't seem to cause any problems though, and the playing of all the forces was of a high standard, crisp and well co-ordinated. That said, having never heard it live before, I wonder if something extra might have been gained from such a division - certainly it was done on both recordings involving Britten that I'm aware of [note - I'm certain someone told me that someone else conducted the chamber ensemble on Britten's own Decca recording, but if so it isn't credited and I can find no reference, so my mind may be playing tricks on me].

At times, the playing was absolutely electric, especially the ringing or the brass in the Dies Irae and the Sanctus. It was complemented by sparkling singing from the RSNO Chorus. Denève also seemed to be trying for Runnicles-esque orchestral placement, sticking the RSNO junior chorus outside the doors of the Grand Circle. Doubtless this produced a magical and etherial sound for most people. Unfortunately, I was sitting as close as possible to the door, so where I was it didn't quite work out that way.

The trio of soloists was pretty good. I enjoyed baritone Audun Iversen very much. Soprano Marina Rebeka was okay, though at times I would have liked a little more volume from her. Star billing, however, had gone to tenor Ian Bostridge. Regular readers will know I have no great love for him, mainly down to his over-emoting when singing lieder. Here, there was much less of that and, with the exception of the final poem, I for the most part enjoyed his performance.

In concert, one tends to listen more carefully to the texts. As you doubtless know, Britten chose to set poems by Wilfred Owen along side the requiem text. This makes for a profoundly moving experience, as with the tenor and baritone's final line of "Let us sleep now" and as at the end the choirs ask for them to be granted eternal rest.

Denève brought things to a hushed close, keeping his arms aloft to preserve the fitting silence that greeted it for as long as he could. Rightly, he had chosen to put the War Requiem in the programme alone. It is the sort of work that needs no accompaniment and would be diminished by it.

Those is Glasgow should most certainly try and catch tonight's repeat.
Posted by Tam Pollard at 16:19

from where I was in the centre of the Upper Circle the offstage junior chorus was magical - one of the best aspects of the whole performance for me. I would also agree with you concerning the lack of a second conductor. Though like you I had never heard it live before I don't think anything was gained by it, although Denève was nonetheless superb in holding it all together

The saturday perfomance was very moving.I sat 4th row in the stalls centre.The two male soloists gave an intense perfomance with the chamber orchestra around them. The choir in GRCH can sound far away in this seat but every word was heard. The childrens chior was coming from heaven both spiritually and placing it high and out of sight. The soprano was situated to the left of the choir requiring two of the audience to be reseated.
I was intwo minds on whether I would go to the concert but after a quicklisten to Britten's own recording I went.
The pre-concert talk was also very informative.