In it's first three instalments, Gotz Friedrich's Ring delivered a fairly solid production. At the same time, Runnicles has confirmed that he is one of the leading Wagnerians today and drawn some pretty special playing from the orchestra - it was a nice touch when, after more than fifteen hours of music, Runnicles brought them all to the stage at the end. 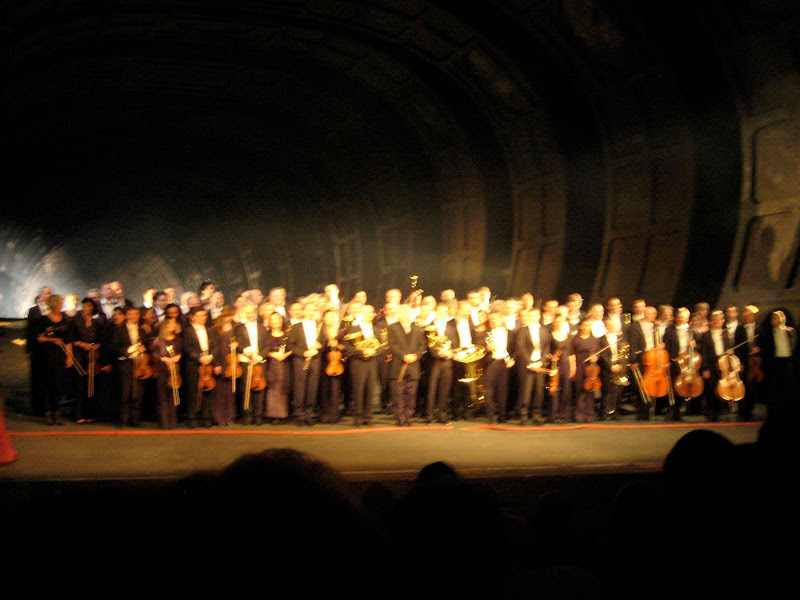 The final night began well with an effective staging of the Norns, something that can often drag. Red ropes criss-crossed the stage in front of the seated and blindfolded singers. They sang pretty well, though the first Norn, Liane Keegan, sounded a little underpowered. That said, a little too much smoke, a hallmark of this production, poured out when the curtain rose and, unfortunately, one of the ropes didn't snap as it should have.

It was change time again in the cast: Brunnhilde was, thankfully, back to Evelyn Herlitzius, though she was a little screechy to begin with and not always quite as precise as might have been liked. That said, her acting was superb and she was infinitely preferable to Janice Baird who we got in Siegfried. Gone too was the Siegfried of Stefan Vinke and in his place came Alfons Eberz. He benefitted from not having a cold, but could have had more power and was a less good actor. Still, as a pair, they had massively more chemistry.

Siegfried then made his journey down the Rhein, It didn't entirely make sense that an effect very similar to the underwater Rhein of Rheingold was used, though perhaps he's really good at holding his breath. A horse briefly appeared but then vanished again.

Upon arriving at the hall of the Gibichungs a whole host of new cast members greeted him. Head and shoulders above the rest towered Matti Salminen whose Hagen was superbly characterised and sung. Heidi Melton did well standing in as Gutrune, especially as she was fresh from singing the third norn (reminding one of the 1956 Bayreuth Ring when Astrid Varnay managed to sing the third norn and then deliver a Brunnhilde better than any that's been heard for many years - they don't make them like that anymore, sadly). Markus Bruck's Gunther was suitably wet. The main problems here were shortcomings in the generally solid production: why were the siblings engaging in a little incest? Why was Gunther got up like Stalin, a person he in no way resembles (similarly, why was Hagen looking distinctly reminiscent of Lenin)? The set was full of oddly distorting glass, giving effects you would expect in a hall of mirrors and not adding much. Similarly, swearing blood-brotherhood by slitting their wrists seemed overdoing it slightly.

The scene then changed back to the mountain top. Well, for the most part. For some reason that eluded me, a few of the bits of Gibichung Hall remained, along with Hagen who sat, impressively still, through the remainder of the act. Why? Here, however, came a much more pleasant surprise in the form of Karen Cargill singing Waltraute. She sang the role the last time I heard it, when Runnicles did it at the Proms, and really is second to none.

All that said, and despite some excellent orchestral playing, the first act does always drag somewhat for me. This is not a problem, of course, for act two, which positively races along. Here the funny glass of the set came into its own as Alberich, the excellent Tomasz Konieczny, one of the cast's few constants, appeared in Hagen's dream, his warped and distorted appearance adding wonderfully to a scene that is difficult to stage effectively. Unfortunately, like the smoke, they didn't seem to know when to leave well alone and everyone else was doing it for no very good reason.

Also, there was suddenly a big flat slap bang in the middle of the stage at the front, often blocking the view. Fortunately they soon flew it out, but I'm not quite sure why it was there in the first place.

Then came the summoning of the chorus. Not only was it vast, but the sound generated was astonishing. The only drawback was that they seemed to move about as though they didn't quite know where to stand. The energy was taken up another notch by Herlitzius's performance as the wronged Brunnhilde.

Act three was electric. The production was generally excellent, starting with the catwalk-like structure that allowed Siegfried to talk to the Rhein maidens. That said, I'm not sure why he jumped into the river, nor why they were passing around something that resembled a shiny tea tray.

The death scene was extremely well staged, the catwalk becoming tables for the hunters. Eberz's recounting of the woodbird didn't quite work. Perhaps it was just that he is no Wolfgang Windgassen (who is?), but it didn't sound sound quite right - indeed, it sounded as though it had been transposed down to better fit his voice.

That said, following his stabbing he was exceptionally moving, though this is in no small part down to the power of the music. Here the orchestra and Runnicles were possibly on their finest form of the cycle. This high emotional temperature was further raised by the funeral march which had an incredible energy and volume. The chorus had made themselves invisible under black sheets and the body was just left there for the duration, allowing the music to speak. The hall set was then flow back in at the end. An excellent example of a production having the sense to simply let the music speak.

The immolation was suitably dramatic and there was plenty of fire. The rather tacky white plastic-looking Grane, glimpsed in act one, appeared by a pillar and did nothing. A proper horse might have been exciting, but surely best to leave it to the imagination if you're going to do something so half-hearted. Brunnhilde leapt towards the fire with suitably aplomb, if not quite so well done as Katya's leap into the river in the recent ENO production (but, in fairness, fire is trickier from a health and safety standpoint). The survivors then staggered out as the libretto calls for, then a bright white light shone out, indicating a nuclear blast, then figures in white sheets appeared, giving the stage a look very similar to that at the start of Rheingold. I suppose the intention was to give the Ring a cyclical nature - a sort of all this has happened before and will happen again (to quote Battlestar Galactica). The problem is that I'm not at all sure that was Wagner's intent; rather, it is about the ending of the time of the Gods and the dawn of the time of men, about a seismic shift in the order of things, the end being a new beginning, not some kind of loop.

The Rhein maidens rushing forward, dragging a sheet to cover the stage, nicely represented the river rising up and quelling the flames - a difficult thing to do well. Given this, it would surely have been an easy matter to drown Hagen under it, rather than have him wobble oddly off to one side.

The off-stage horn (presumably still Daniel Adam, who did it in Siegfried) received no credit on the cast list. Speaking off off-stage brass, the sound Runnicles produced from the orchestra in act three was extraordinary, indeed, it sounded as though he had placed some of them offstage. Certainly this would be true to form, and he did so during the Proms performance, with players strewn memorably around the galleries of the Albert hall.

One thing that does seem clear, though, is that there are differences with the Repertoire system. These primarily affected the production, which in places felt a little under rehearsed, mostly in terms of blocking. Examples include Siegfried and Brunnhilde obviously taking their places during the norns, the stage hands coming on early for the change from Gibichung hall to go back to Brunnhilde's mountain - given how little work was to be done, there can be no justification for this beyond sloppiness - and hand's visibly holding Grane during the Rhein journey. There have been similar issues in the earlier operas.

Overall though, it's been a good Ring. The production has been good, and generally faithful, if perhaps not quite as special as that of Scottish Opera in 2003. The cast has been patchy and rather too inconstant, but it could have been worse and some of the singing has been very good indeed. The orchestral playing, and the directorship of Runnicles has been a treat (though perhaps not quite hitting's its full stride until Walkure). All in all, well worth the trip to Berlin.
Posted by Tam Pollard at 17:35