I'm a big fan of both Carlo Maria Giulini and Schubert's great C major symphony, thus when I stumbled across this new Testament release of a live performance with the Berlin Philharmonic (coupled with the unfinished), picking it up was a no brainer. It was also, unfortunately, a mistake. 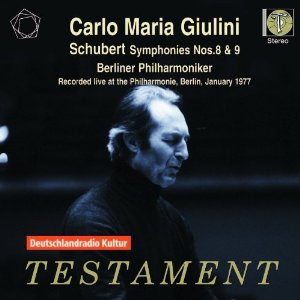 The problem with the performances of both works is simple: they are dull; very, very dull. So much so that at times it was genuinely a struggle to listen through to the end. I can think of few CD releases, and certainly no others involving Giulini, of which I would say the same. Had you given me the disc to listen to blind and then told me the identity of the conductor, I would not have believed you.

There are some climaxes, some flashes of passion, yet they are too few and far between; and even these do not reach the intensity that can be found in the finest readings when they are pausing for breath. And, almost immediately thereafter, when things slow or quiet down, all tension and momentum is lost and we find ourselves meandering blandly along again. Even the best moments never feel earned.

Of the pair, the unfinished perhaps fares slightly better, but it is much the same story. In a good performance it feels at the end like there's nothing left to say. A good performance almost explains why it was left unfinished. As the late, great Charles Mackerras put it in the liner notes of one of his recordings (which achieves this):


However, the beauty of the end of the second movement seems so conclusive that nothing can follow it convincingly. Schubert failed to finish many symphonies (five, actually), but this B minor symphony, ending in the nearly related key of E major seems to require nothing further to be said as the cellos and basses descend to the depths, pizzicato, and the whole orchestra swells and fades. A perfect ending to a perfectly proportioned work.

In the Great, comparison with Giulini's 1975 live London Philharmonic performance is instructive. While not the greatest reading, it is in another class altogether, thrilling and compelling. And even more drama and passion can be found in his Chicago recording. Of course, I have other live Giulini recordings, such as Verdi Requiems from 1963 and 1964, which despite their temporal proximity are very different, the latter fearsome and thrilling, the former bringing out more calm and beauty. Of course, it doesn't help that this new recording isn't actually a real live document. It looks that way from the packaging: there is the usual prominent Testament description of "Recorded live at the Philharmonie, Berlin, January 1977". But, caveat emptor: often Testament will also give you the very day, and the reason they do not is revealed in the liner notes, namely that these recordings were made over two days at two concerts. Perhaps it is this splicing together of two performances that has shorn them of Giulini's magic. I know why people issuing live performances do it: they are looking for perfection and fearful of any mistakes. Yet in removing them, they can also remove the magic of the live event. If one of the original concerts was good enough, they should have sufficient faith to release it entirely. If not, then frankly they should leave it in the archive. It is not as though we are short of opportunities to hear Giulini conduct these pieces.

Then there are the sorts of quibbles that wouldn't matter so much if the disc was more compelling artistically, but which grate because it isn't. The sound quality is poor. In fairness, there are technically far worse recordings where I forgive the shortcomings, but they don't normally come from 1977, and for that era this isn't really good enough. The sound is somewhat harsh, resembling the Barbican more than the Philharmonie, and the tone feels a little odd. The recording also feels very compressed, with the dynamic range far less than it ought to be. Now, this is radio recording, but given it's still in copyright, surely they had access to the orignal tapes, so it is puzzling. Perhaps these technical issues explain why the Berliner's playing, while perfectly decent, doesn't feel like anything to write home about.

The field of recordings of both these symphonies is a crowded one. Indeed, Giulini himself has two others readily available (with the LPO on BBC Legends and with the Chicago Symphony in a new DG budget box of his recordings there), both of which are far superior to this issue, possessing the fire and passion that I like most about his recordings. The Chicago box also includes a superior unfinished. When one reels off the greats, such as Furtwangler, Erich Kleiber, Jochum, Mackerras (any of his three, but my preference is that with the SCO), Barbirolli, Rattle and Bernstein, to name just those who spring most readily to mind, the disc looks even less recommendable.

This sort of review sometimes ends with the note that it is for completists only, or those who were there. Perhaps, though given it is spliced, I'm not sure the latter applies. As for the former, I'm something of a Giulini completist myself (I have four of his Verdi Requiems on disc) but this will not be remaining in my collection.
Posted by Tam Pollard at 22:38