This is a review of the concert broadcast. For those of a technical persuasion, listening was done via Radio 3's online live HD Stream at 320 kbps AAC.

Ever since the Proms programme was published a few months ago, I have had Prom 9 down as a must hear. There were a variety of reasons. In the first place, the Halle are a very fine band, especially under their current music director Mark Elder. Next, I adore two of the main works on the programme: Sibelius's 7th symphony and Janáček's Sinfonietta. Lastly, the team have recorded Sibelius's 1st and 3rd symphonies, and pretty well too. 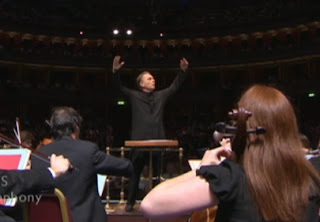 In the end, the concert was something of a mixed bag. The first half was given over to Sibelius, but along with the 7th they also played his Scenes Historiques - Suite No.2. This was an odd choice, and felt very much like padding (and padding that wasn't really necessary in a concert that lasted over two hours). It was nice enough, and they played it well, but it pales next to the later masterpiece. Less is very often more, and while putting a twenty minute work alone in a concert half may look a little empty on paper, if the work is right it by no means is, and indeed the piece is enhanced. Such compositions need no support.

This is especially true when the performance is good, and in this case it was. Let us start with the superlative playing of the orchestra, from wonderful shimmering strings to that majestic trombone theme, one of the finest orchestral turns that exists for the instrument, there was nothing to complain about. That theme was very prominently balanced (at least on the broadcast), but in my view that is no bad thing. Then there was Elder's direction. The symphony holds many potential pitfalls, not the least of which is that in the wrong hands it can feel like a disconnected series of miniature episodes. Not the merest spectre of such a problem existed as, choosing generally moderate tempi, he never allowed momentum to flag and took the players from one passage to the next in an utterly natural manner. At times, often as a result of the way they shaped of some phrases, the results were powerfully moving.

From the driving string theme that led to the return of the trombones until the end, I was utterly carried away. As the piece froze for its ending, the feeling was one of near perfection. Certainly it ranks among the finer performances I've heard, and I'm generally quite hard to please in the 7th (hopefully we will see it from them on disc soon). The symphony may be short in time (this performance, a little shy of 23 minutes, running on the longer side), but it manages to travel the most incredible distance in that time, especially when performed like this.

It is also one of those works that, when it finishes, leaves you feeling it has said all there is to be said. Normally one would find it at the very end of a programme and it felt odd, unnatural even, that there was more to come. I was left not wanting anything else, but rather to keep the Finnish tunes and textures ringing in my head for the rest of the night. So, I switched off the wireless, opting to catch the rest after a longer pause than the interval afforded.

The second half, which I listened to on the following evening, began with Bartók's 3rd piano concerto. I'm not hugely familiar with the piece, I haven't listened to a recording in a while and the last time I can recall hearing it live was when Steven Osborne played it with Ilan Volkov and the BBC SSO at the 2004 Edinburgh festival. I remember that being thrilling and dazzling. This, on the other hand, left me cold. It doesn't help that I have never overly cared for the pianism of András Schiff, who I tend to find rather cold and clinical. For an encore Schiff delivered some Schubert so devoid of emotion I'd never have guessed the composer if the announcer hadn't told me.

What, then, of the Janáček, a work long associated with Charles Mackerras who set the interpretive bar extremely high when I heard him conduct it with the Philharmonia a few years back in the then recently reopened Festival Hall? With a magnificently coloured blaze of brass fanfares, Elder and the Halle got off to a good start. As the performance progressed, they brought out the rich variety of Janáček's unique orchestral textures. And there was no lack of excitement, such as with the stabbing brass chords that come in the middle of the third movement. True, it didn't have quite the incredible energy of the most compelling performances; the ending, though strong, and doubtless sounding rather special in the arena, lacked that crucial extra voltage that Mackerras was capable of bringing to the piece.

You can listen to, or watch, the concert until next Thursday.
Posted by Tam Pollard at 22:44