The programme Stéphane Denève had chosen to open his final season in charge of the RSNO illustrated the year's major theme more effectively than any press launch, that being the musical links between France and Scotland. So it was that they began with Debussy's Marche écossaise sur un thème populaire. Well, almost. Actually, things kicked off with Meggernie Castle, said popular theme. It was not, however, played by the RSNO, but rather by three members of the National Youth Pipe Band of Scotland: Craig Muirhead, Scott Wood and Iain Crawford. Standing at the top of a colourfully lit organ gallery, they certainly looked very fine. They sounded very fine too, if you like the bagpipes. I fear, though, even when played this well the tone of the instrument is not one I care for. Still, it was interesting to hear the original tune before we then heard it from the fine flute of Katherine Bryan. But in the hands of Denève and the orchestra, the winds especially, I much preferred it. 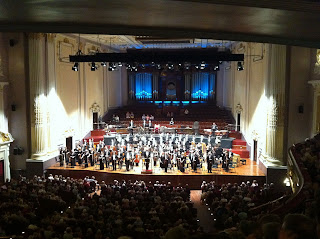 Debussy was followed by Bruch, but still with a distinctly Scottish flavour in the form of his Scottish Fantasy. The soloist was that favourite of local audiences Nicola Benedetti. Despite her regular appearances here, I think this is actually the first time I've heard her live, as other things keep arising that get in the way of the concerts. She played beautifully and was equally at home in both the slower passages and the work's more exciting moments. Beneath her Denève and the orchestra provided sensitive accompaniment. Yet, as a soloist, I didn't find she had quite the individuality or flair that marks out my favourite performers.

For me the highlight of the evening came after the interval with more French music, this time Fabien Waksman's Le parfum d'Aphrodite. He first worked with the orchestra a few years ago, composing a short piece for a concert I didn't hear, and was promptly invited back. With good reason, it seems. If he was intimidated by having to compose a piece to go before that concert war horse La Mer, it did not show, either in the music or in his jokey response, as relayed by Denève, that he might compose a piece entitled The Beach. The result, inspired by the story of Aphrodite's birth from the sea, was both beautiful and compelling, with Waksman making fine use of orchestral colour, especially in various well judged percussion effects. This was music that was extremely evocative, calling to mind a hot southern European sea, doubtless aided by the sauna-like and not very September temperature in the Usher Hall. It more than passed my key test for any new composition, namely that I would very much like to hear it again. Hopefully a recording will be forthcoming.

So fine was the Waksman that it slightly spoilt La Mer for me. I'm never the biggest fan of the piece, mainly because I don't find it very evocative of the sea and this always makes it slightly frustrating to listen to; I suspect if it was called something else I'd like it much more. That problem was underscored by following a piece which did so. Neither Denève's persuasive way with French music, nor the fine playing of the orchestra won me round, until the very end when he whipped them up into a thrilling finale sufficient to temporarily wash away such doubts.
Posted by Tam Pollard at 18:16

Where do I start? Apart from his appalling grammar and syntax (is he a soloist, for example? also le parfum please )I totally disagree with many of his comments. First time hearing Nicola Benedetti live? Things getting in the way? Do I care that he does not like bagpipes, or that he missed the excellent concert promoted by Deneve featuring young composers. The concert last night in Glasgow was wonderful.I was looking for reviews on line, but I am sorry I came across this blog.

Apologies for the high number of typos and erros in this post, which falls short of my normal standards (most should now be corrected).

Since a review is just someone saying what they did and didn't like (and why) it seems entirely appropriate to mention that I don't like the bagpipes.

I also think it's relavent to mention that I missed the concert with Waksman's earlier composition, since it explains why I make no comparison to the earlier piece (as I would probably have done, had I heard it).

Much the same might be said about the comments about Benedetti. Since a review is inherently a personal reaction, I think it's informative to show where the reviewer has come from. I'm not sure from your comment whether you're criticising my mentioning it was my first time hearing her or the fact that it was my first time. I elaborated on the point since, as I attend and review a lot of concerts, I thought it might strike some readers as odd that I've never heard her in the flesh.

I didn't know Denève was leaving RSNO, that seems a shame - is he going on to another job or contract has just run its course? I saw him at the Proms a few years ago doing Symphonie Fantastique and thought it was gobsmackingly good. Ran into him at the bus stop afterwards as well and told him so; he was very charming!

Nice to come across your blog.

Denève has moved to the Stuttgart Radio Symphony Orchestra (taking over from Norrington) but the contract was up at the end of this season (actually, the end of last year, but they did a one year extension).

He can be very good indeed, though some repertoire suits him less well than others. But in the likes of Berlioz he's pretty tough to beat - he did an excellent Fantastique up here last year. His replacement here is Peter Oundjian and so it's a little early to comment, but I think it is a bit of a shame to be losing him.