In James MacMillan's St John Passion, Donald Runnicles and the BBC Scottish Symphony Orchestra had opted for a bold statement to open their 2011/12 season, their third with him as chief conductor. The ninety minute choral work had the programme to itself and it was refreshing that so much new music didn't seem to have put the punters off, with Glasgow's City Halls more or less sold out. 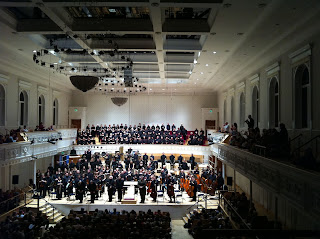 I was likely with the majority in never having heard it before, because while MacMillan is Scottish this marked the first performance here of a piece premiered some three years ago. In part my ignorance is down to a failure to do my homework: a little while ago I did pick up Colin Davis and the LSO's recording, but for various reasons I have not got round to listening to it yet. That said, while familiarity and knowledge can in many ways enhance the listening experience, it must also be said that there is nothing quite like hearing something for the first time in a live concert.

At its best, the piece is very fine indeed. MacMillan writes especially well for brass, and the orchestra's delivery of the blazing fanfares that appear throughout the work was a treat. Similarly the latin choruses that bookend the first nine movements tended to be special moments. On the whole, I found the shorter second part significantly more compelling than the first: there was, for example, the absolutely searing drama of The Crucifixion, and the haunting beauty of Jesus and his Mother. Elsewhere, and in the first part particularly, the music didn't always seem to underscore the drama as effectively as it might have done, nor did it seem vividly to evoke the scenes or violence described. Some choices in the orchestration were much less successful than others, with the gongs at the close of Jesus and his Mother and the jingle bells at the very end feeling like unnecessary garnishes.

In general, the playing of the BBC Scottish Symphony Orchestra under Donald Runnicles was excellent. Mark Stone, in the only solo part of Christus, gave a strong performance. The singing of the BBC Singers, as the narrative choir, and the London Symphony Chorus, sounding suitably big as the 'large chorus', was also very fine, though if you wanted to follow the words, burying your head in the programme was more or less essential. In fairness to the choirs, the settings often didn't seem to help them in this regard.

The piece closed with a purely orchestral section. In the programme note MacMillan describes it as "a Song without Words - no text could suffice here - it is left to the music alone to explore the deeper tragedy which has just unfolded". However, for me it didn't do that, much as the piece as a whole failed to. This is perhaps down to the text which does not really speak to me. Yet the same could be said of much of Gerontius, Mahler 2 and Messiaen's St Francis, all of which I have found particularly moving in concert. Indeed, there was nothing here to match Messiaen's knack for reaching into the spiritual beyond, the inexplicable, that for which truly there are no words.

That said, despite its flaws it is an impressive work and I'm very glad to have heard it and heard it live. I'm also glad Runnicles and the BBC SSO chose such a new composition to open their season (sadly in Glasgow only, but of course had they done this in conservative Edinburgh it would doubtless have played to a deserted Usher Hall). However, I'm not sure it passed the rush to hear it again test. Indeed, even the rush to the iplayer to listen again test (it was broadcast live and you can hear it here).

Runnicles and the BBC SSO continue their third season together on Sunday night in Edinburgh with Strauss's Four Last Songs and Elgar's second symphony. If their performance of the 1st at the Proms last year is anything to go by, this should be a treat. In other good news, it was announced earlier in the week that his contract as chief conductor has been extended to 2015, so he's not going anywhere for a little while yet.
Posted by Tam Pollard at 17:15