Ticciati and the SCO open their season with the Symphonie Fantastique

Berlioz's Symphonie Fantastique is popular these days, Robin Ticciati's outing with the SCO being, by my reckoning, the third in the Usher Hall in the last twelve months (though I attended the Glasgow performance). In many ways it was the most successful, certainly trumping Dutoit's overly hard driven account at the festival. Indeed, go back only a little further and all three of Scotland's main orchestras have performed it with their present chief conductors. 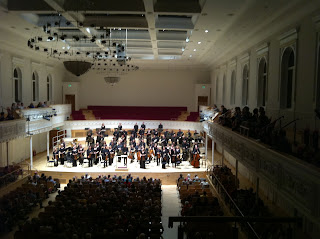 Ticciati brought a nice dreamlike quality to the opening, but also plenty of drama, not to mention the fierce and impressively precise attack of the strings. Then there was the ball of the second movement, which danced along nicely, building an ever more intense and frantic energy as it progressed. That said, I would have preferred a slightly broader tempo at the outset, allowing the harps in particular a little more room to bloom. There were small quibbles with the third movement too; not with the rich cor solo from Rosie Staniforth, but rather the answering oboe of Robin Williams. This was fine in all but its location: not placing it offstage rather punctures the poignancy of the cor's final unanswered calls. You couldn't, however, complain much about the final two movements, thick with excitement and drama, vividly descending into drug fuelled madness as Ticciati drove the orchestra on to the thrilling conclusion.

I do have a reservation, though: is this the right piece for the SCO? With four bassoons, three trombones, two timpanists, three percussionists, four trumpets and so on, nudging within striking distance of seventy players in total, this was no longer a chamber orchestra. Does that matter? It's true that this did not come at the expense of overall quality (though in a few moments, at the end particularly, the wind and brass did wash out the strings who had not been bulked up to the same degree), yet something of the intimacy that makes this band so special was not there.

The question is slightly academic. After all, they're hardly going to be enlarging to this sort of size every week (I doubt they could afford to). Yet here's the thing: last season's opening extravaganza, a concert performance of Don Giovanni, not only played to one of the SCO's great strengths but also plugged a gap in the market. (I would be interested to learn the different costs of the two concerts.) It also showcased Ticciati's prowess as an opera conductor; not for nothing have Glyndebourne tapped him as their next MD. Similarly, it seems a slight pity that Ticciati has picked the Berlioz for his recording debut rather than his revelatory Haydn of last season, which was in my view rather more special (and which isn't nearly so well served on disc).

The first half of the concert was less successful. It opened with a generally flat and lifeless performance of Schumann's Genoveva overture which only came alive in the final moments. In fairness, I think much of the fault lay with Schumann.

Berlioz's Tristia ('sad things') were more successful, though the string sound seemed a little harsh. The orchestra were joined by the SCO chorus who sang well, especially in the wordless Marche funèbre pour la dernière scène d'Hamlet which, with its dramatic drum beat, was perhaps the most effective of the three pieces. Yet here too, with the orchestra bulked up beyond its normal size, the strings were a little overwhelmed in a few places.
Posted by Tam Pollard at 22:04