Not much for the Ears today.

To and from work (and to and from orchestra) they were accompanied by the audio edition of the Economist, in an effort to catch back up. It was the 29th August issue, so briefly today I was only a week behind. 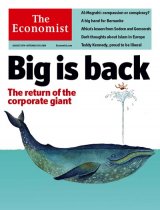 Then it was off to orchestra. I play trombone, very badly, in the amateur Stockbridge and New Town Community Orchestra, affectionately SNOTCO; that said, I do hold the distinction of being the best trombonist, but mainly because I'm also the only trombonist. Interestingly, membership seems to have ballooned and we were almost too big for the hall at St Stephen's Church (our temporary home while Stockbridge Parish Church is refurbished). However, while we now have three basses, six violas and more violins than I could count, we still only have the one trombone. If you're from Edinburgh and fancy joining me to play the trombone badly, or even well, on a Thursday evening, followed by a trip to the pub, let me know.

Being essentially a sports hall the acoustic was less than ideal. However, in it we rehearsed Walton's Crown Imperial, which does have some rather fun brass action, Malcolm Arnold's Little Suite No.2 and, for fun, Live and Let Die from a James Bond medley.

Once home, and while writing this, it was time for the evening's Prom, which the digibox had handily recorded. Welser-Most had stepped in for an indisposed Harnoncourt to conduct the Vienna Philharmonic. I must admit, I'm quite shocked by how few women there are in the orchestra. I found Haydn's 98th symphony a little staid. I'm enjoying Schubert's great C major much more, but I think I must go to bed rather than finish it now.
Posted by Tam Pollard at 01:09