Powerful emotion, exceptional artistry - The Dream of Gerontius (Elder and the Halle)

Sometimes the best is saved until last, and in this year's Edinburgh festival, what I've managed to see and hear of it, anyway, it certainly has been. Certainly I was always keen to hear Mark Elder and the Halle play Elgar's most famous oratorio, The Dream of Gerontius, I've never heard it live before, but I wasn't expecting to be bowled over in the way I was. What I got was a performance that ranks amongst the most powerful and moving evenings I've had in the concert hall. 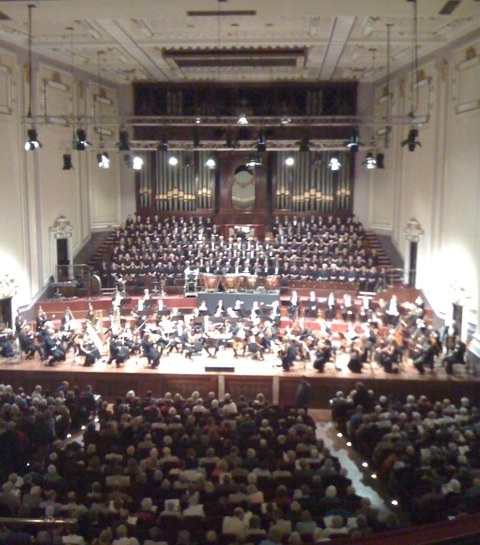 Right from the start, and the quiet opening passage on the violas, it seemed clear we were in for something special. Whatever section of the orchestra Elder exposed, they rose to the occasion splendidly, be it the rich and lush strings, the frenzied timpani or the crisp and powerful brass, capturing as fully the trumpets of heaven as anything on earth ever will. There was not a weak link to be found.

Of course, Gerontius is about much more than world class orchestral playing. Fine singing is needed too. Fortunately tenor Paul Groves was on hand to deliver a beautifully clear and poignant account of the title role. The role of the angel is more problematic, since comparison is instantly invited with Janet Baker, and her legendary recording with Barbirolli and Halle orchestra he helped rebuild. Alice Coote acquitted herself superbly, with power, beauty and delicacy too. Bass Iain Paterson was on excellent form too.

More importantly, all three of them seemed to share with perfect unity Elder's conception of the piece. They were joined by the Edinburgh Festival Chorus, augmented by the National Youth Choir of Scotland. Now, the Festival Chorus has not always been what it was, but in the last couple of years it has regained much of its former greatness. It is true its sound may be a little female heavy, but what a wonderful sound it was that chorus master Christopher Bell had got from them, so beautifully ethereal. And yet at other times, ferocious with force. In the second part, as the demons, they brought a stunning range and variety to the repetitions of "Ha! Ha!".

Then came the big chorus of the Choir of Angelicals as they sang "Praise to the Holiest in the height". The impact was staggering. Elder brought his forces to an astonishing climax, holding it, his arms stretched out wide and trembling at the force, before dropping everything away and leaving just a low rumbling organ chord. And how wonderful it was to hear the Usher Hall's mighty organ getting a good workout.

Elder deserves great credit for the impact of the performance. In an unashamedly romantic reading he milked every available ounce of drama and passion from the score. He provided a sense of purpose and direction throughout. Never, did it drag, as can sometimes happen in the early moments. He elicited stunning dynamic contrasts from his great orchestra, which perhaps explains why it's never quite grabbed me on CD - this is the kind of score you need to hear in the flesh before you can really know it.

If I were to split one hair, it would be that the interval between parts one and two was a mistake, as it took a little while to build the emotion back up. How much better it would have been to have played it straight through. Still, in a performance that several times brought tears to my eyes, such quibbles hardly matter.

They were selling the CD in the interval (which features identical forces save the substitution of the Halle choir and Bryn Terfel in the bass role). Listening to it as I type, I can confirm it contains much of the magic. If you haven't heard it, buy it. If you were there, it's a superb memento of a magical evening and you should buy it to.

The festival should immediately book them to do The Kingdom and The Apostles in coming years, or, frankly, anything else.
Posted by Tam Pollard at 01:20