Hot on the heels of two excellent nights with Oramo and his Finnish Radio Symphony Orchestra, two more with a legendary orchestra from another continent looked set to be the sort of embarrassment of riches that only a festival can deliver.

I first met the Clevelanders on their last visit to Edinburgh back in 2004, on that occasion for three consecutive nights.  It was an extraordinary experience: the discipline and precision of the ensemble made them a visual sight to watch unlike any I'd seen before or any I've seen since.  This was matched by the quality of their playing. 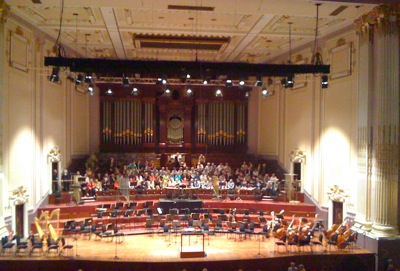 Their programme started with a notable visual, though it was notable for the fact that chairs were cleared into stacks around the stage and just six members of the orchestra, conductor Franz Welser-Möst and organist Joela Jones were present.  They delivered three pieces by Charles Ives.  The first of these, Variations on 'America', for solo organ, made for a wonderful start.  Sharing its theme with God Save the Queen, it proved highly enjoyable, laced with wit and playfulness.  I always tend to feel the anthem itself is a poor piece of music, good only as musical whitewash for getting rid of music stuck in your head, except when I hear the fun that can be had making variations out of it, such as with Beethoven's set.  And so with Ives as he treated it to such styles as music hall, fairground organ and a polonaise.  The final variation, with it's low counterpoint, marked "as fast as the peddles can go", was especially good and gave Jones a chance to show what she could do.  Even better, it was an opportunity to hear the Usher Hall organ in its full glory.

The second piece, From the Steeples and the Mountains, was also very interesting: a single long crescendo, built from four sets of tubular bells, a trumpet and trombone, wonderfully textured and magical to hear.  Then it was back to solo organ for the Postlude in F.  While this three part structure was effective, the final piece was not.  Not bad, per se, but nothing very remarkable either.  Written when Ives was just 15 this is perhaps not surprising, yet it meant it paled rather in comparison to what had come before. 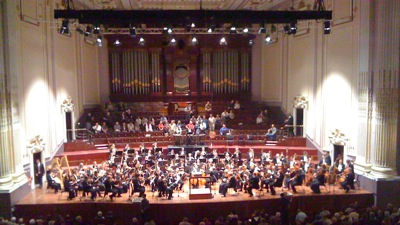 For the second half the full might of the Cleveland Orchestra took to the stage to play Bruckner's 8th symphony.  Given that back in January I heard just about the finest reading of this work that I ever expect to under Runnicles and the BBC SSO, the bar was set very high indeed.  They did not clear it, not even close.

In the first place they seemed to have hobbled themselves by choosing the rarely performed first edition of 1887.  I've never been convinced by this version when I've heard it before (such as on Georg Tintner's survey of the symphonies for Naxos) and sadly the Clevelanders and Welser-Möst didn't change this.  What followed were ninety pretty dull minutes, the adagio in particular being interminable.  And despite containing some excitement, the scherzo simply lacked bite.  On the one hand the problems seemed to lie with the score, which according to Stephen Johnson's programme note contains harmonies "more rough-edged" than we are used to.  Certainly there was not the clarity and stunning beauty of a great Bruckner climax, not the perfection for which he seems constantly to strive, and I missed it.

At other times, though, the blame seemed to lie squarely at Welser-Möst's feet.  Some of the climaxes were reasonably exciting, but whenever they ended, whatever tension had existed vanished.  Pauses added not one iota of drama.  The whole thing seemed to come in disconnected stretches rather than possessing an overarching structure and momentum.

Perhaps most disappointing, though, was the orchestra.  Where was the visual spectacle of six years ago?  That incredible driving row of basses were now squashed up to one side; where previously you couldn't have put a cigarette paper between the members of each section, now they were simply normal, though nonetheless very fine.  It seemed as though the very thing which made this orchestra unique and therefore so special has been lost.  Hopefully they will find it again before their second concert tonight.

I have to disagree. I heard a few people voice their disappopintment, including a friend who said he'd failed to get the expected "white-knuckle ride", but I can only think they were confusing Bruckner with some of his contemporaries. For me this was a marvellous interpretation that captured the composer's classicist style of Romanticism and was free of the heart-on-sleeve colouring and overly Wagnerian grandstanding that some interpreters graft onto Bruckner in lieu of finding ways to bring out the emotional depths inherent in the music. And I found the Adagio stunning and poignant; my eyes welled up more than once. Admittedly, the horns lacked a little punch and dynamism in places, and from where I was sitting the bass strings were a little weak, but the violins were near-perfect, and the woodwind even better. And although my heart had sunk a little when I opened the programme to discover that they were using the 1887 score - Bruckner's habit of relentless restatement is bad enough without adding 20 minutes to an already massive work - by the end I was converted to the merits of the earlier version.

Pleased to see this review, as I seemed to be the odd man out among my friends. I was hugely disappointed: this symphony has so many places where it needs drama to contrast with other-worldly detachment. Climaxes were loud, but where was the tension in any of the quiet build-ups? The Finnish team the previous night had the requisite breathtaking pianissimos that drew you in, but also much more punch when things got lound. Cleveland was the all-too-common professional-band problem: perfect tuning and ensemble, but utterly uninvolving (I make an exception for the horn section). All of this has to be blamed on the conductor, who never seemed to be moved at any point - and who was arguably never in charge. I have never see a leader of the violins impose himself in the way that happened last night: fantastic violin ensemble, but all the section principals were watching the leader, rather than the man with the stick. The contrast with the controlled passion of Oramo's conducting with the Finns was marked.

Thanks for the comments: fascinating - as ever one man's revelation is another's boredom.