Note: this is a review based on the concert broadcasts via Radio 3 and BBC 4.

It's nearly five years since I last heard Donald Runnicles conduct Mahler's epic third symphony with the BBC Scottish Symphony Orchestra.  That was at an Edinburgh festival concert, only the second time I had heard him live, and an utterly magical experience it was too, not least for the astonishing balance he achieved with the posthorn solo in the third movement. 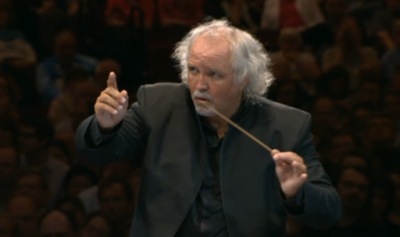 How, then, would he fare with near identical forces five years later, the major change being Karen Cargill, a singer with whom Runnicles has collaborated frequently and to great effect, taking the mezzo role Birgitta Svenden sang last time round.

Things started well, with the eight horns playing as one.  He found a nice darkness to begin with, which is good as the summer has to march in from somewhere, yet even ﻿later on as the summer began to intrude the darkness was still present.  Runnicles also kept a solid grip on the music, ensuring it remained compelling and didn't sprawl as this vast work, the longest Mahler wrote, all too easily can.  This was the case nowhere more so than when he slowed the orchestra to an absolute crawl about five minutes before the close of the first movement, ratcheting up the tension to almost unbearable levels.  Elsewhere it was a bubbling, seething and turbulent movement, calling to mind what makes his Atlanta Beethoven 9 so riveting.  There was some fine playing from the orchestra and Runnicles did well at bringing out the infinite variety of Mahler's orchestration, a fitting expression perhaps for a work so concerned with nature.  His trademark attention to detail was on display too: how much experimentation had gone into muffling the trumpets like that, with cloths draped over the bells, in the finale?  Credit too to the BBC's engineers who ensured it was well captured; a particularly nice balance was achieved with the percussion.

The orchestra shifted gear somewhat for a second movement which alternated between gently lilting and airy on the one hand and sparkling and playful, at times impish even, on the other.  Then it was time for the animals of the forrest and that elusive posthorn solo.  Now, this leads to something of a minefield: get the balance right and the result is breathtaking, get it wrong and it's frustrating.  Haitink, for example, in his otherwise superb Chicago recording opts for a trumpet that jars unsubtly with the rest of the orchestra.  Runnicles also used a trumpet.  Or, that is to say, ﻿Mark O'Keeffe, the orchestra's principal, played the part superbly on a rotary valve trumpet in C (or so @garryfarr assures me, and he's a professional trumpeter so he ought to know, certainly it looked like one).  It sounded nothing like Haitink's though, smoother and not at all brash or intrusive; indeed, so right did it sound that on first listen on Radio I thought it was a posthorn.  And as one would expect from Runnicles, master of instrumental placement, there was a great balance to it - very clear, but also etherial as it should be.  At least, on the Radio there was, whether this same effect was achieved in the notoriously problematic acoustic of the Albert Hall is another question and is probably highly dependent on where people happened to be sitting.  There was some lovely wind playing too and the movement was successful in evoking images of nature.

Then came Mahler's bleak and despairing setting of Nietzsche.  Often my first reaction to a performance of this passage is a regret that Kathleen Ferrier isn't the soloist (a problem exacerbated by the fact that her only recording, with Boult and the BBC Symphony Orchestra, is marred by diabolically poor sound).  That Karen Cargill didn't occasion such thoughts is high praise indeed.  She sang with a nice tone and conveyed a powerful sense of sorrow.  Her delivery of "The world is deep" sent a shiver down my spine.  Beneath her, Runnicles and the orchestra provided fine and sensitive accompaniment, with a fine solo from guest leader Marcia Crayford.  Altogether it made for an incredibly dark experience.

Then the massed forces of the RSNO Junior Chorus and the women of the Edinburgh Festival Chorus joined the fray.  The movement can present a problem: if a conductor lets loose too much it can upstage the orchestral finale.  Here, though, Runnicles and Christopher Bell (master of both choruses, he has gained the Festival Chorus since last time) found something very special indeed.  The sounds they created were wonderful and quite unlike any I've heard.  I don't believe in literal angels, but if they did exist, I could readily believe they might very well sound like that.  Equally vivid were the "Bimm bamms!" as they mimicked bells, especially the delicacy with which they did so at the end, calling to mind It's a Wonderful Life.  Quite low key then, in some respects, but stunningly beautiful all the same.

After holding silence between the movements, Runnicles launched gently into the rich theme of the finale.  They played it very softly to at first, and with achingly beautiful string tones.  Later, when the weight came, so too the even greater tugs on the heart strings.  The movement is a magnificent achievement on the part of Mahler, that he manages to pack more punch with something purely orchestral than he did with the choirs.  Heartfelt and indescribably beautiful in the right hands, with an unstoppable momentum absolutely fitting for the love it depicts, yet all too often it doesn't come off and can result in the whole symphony falling flat.  Even the greatest of Mahlerians are not immune to ths pitfall (I would argue that Abbado's otherwise superb Berlin account from the Festival Hall doesn't work here).  How, then, did Runnicles fare?  He built and held the momentum well, working up to a powerful weight of emotion at the close: Donald MacLeod was choked as he performed the closing announcements and even a few hundred miles north I had a tear in my eye.  Having said that, I don't think they quite achieved the absolute devastation which I've found on recordings such as Haitink's or Rattle's.  Very good then, if not quite extraordinary.

There were some fluffed notes and entries, and while some such are probably inevitable in a work of this scale performed live, there were a few more than there should have been.  However, such was the drama and energy that these didn't seriously detract.  A much bigger and much less forgivable blemish came in the form of presenter Donald MacLeod, normally one of the Radio 3 people I have more time for.  His decision to speak over the gap after the first movement was unbelievably intrusive and he should have known better.  Yes, there would have been about ninety seconds wherein we heard no more than shuffling on the stage and retuning, but the atmosphere would have been heightened rather than burst like a balloon.  Just because there is room to do something, it does not mean that you should.

Of course, for the choirs it was all just a warm up - they'll be doing this again at the end of the month with Jansons and the Concertgebouw.  Where's Runnicles will actually be in the hall for that one, and can't wait.