The Gershwins' lushly scored and accessible tale of love, poverty, prejudice and murder always seemed a fine fit for new worlds theme of this year's Edinburgh International Festival.  Personally, I know the music best from Gil Evans' superb arrangements for Miles Davis, which we will hear later in the festival from the Scottish National Jazz Orchestra. 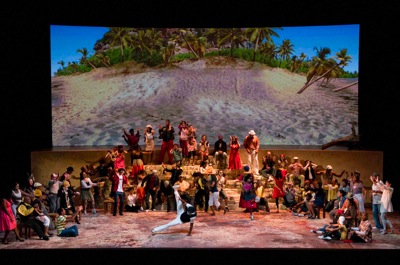 Unfortunately, Opera de Lyon's production of the opera was something of a mixed bag.  On the plus side, the orchestra played their socks off under the baton of William Eddins and the score swung along nicely.  Too often when an opera company puts on works that have a lot in common with musical theatre the music can fall flat, but this did not happen.

The other highlight of the evening was Derrick Lawrence's superb Porgy which was powerful and well characterised and whose diction was superb, an achievement all the more impressive given he was singing from a seated position for the whole evening.

Sadly, it was not all so good.  The primary problem was poor diction.  Lawrence aside, it was often a struggle to make out the words, so much so that if you had not read the synopsis, and were a little rusty on the specifics of the plot, it was actually quite hard to follow what was going on.  If you're going to sing opera in English, you need either to be hot enough in this regard or follow ENO's practice and provide surtitles.  Opera de Lyon did neither and it was a serious problem.  They were not helped by the fact that Eddins' accompaniment was not always as sensitive to the singers' vocal requirements as it might have been.

This was more of a pity because it wasn't really that the singing was bad in other respects - many of the voices were very fine and nicely coloured.  Gregg Baker's Crown was wonderfully menacing and Janice Chandler-Eteme was a generally captivating Bess.  That said, Ronald Samm delivered an unmemorable It Ain't Necessarily So.

Then there was the choreography.  A team of dancers from the Compagnie Montalvo-Hervieu and Theatre National de Chaillot were pretty omnipresent.  On the one hand they were technically very impressive, leaping about the stage complete with head spinning breakdancing.  The problem was that while at times they greatly enhanced the colour of Catfish Row, at others they simply didn't seem to fit at all: why were the fishermen dancing like that before getting on their boat?  It was almost like the director/choreographers Jose Montalvo and Dominique Hervieu having something something to hand couldn't bear not to use it.

This was also the case with the video projection.  At times, this added to the setting and expanded the stage back; elsewhere it was pointless or distracting: a dancer would be strutting about the stage while at the same time strutting differently about the screen.  At some moments it was a film relay of the stage action!﻿  It showed things, such as Clara drowning underwater, that were surely better left to the imagination.  Given the way green screen seemed to have been used to superimpose the actors against paintings, it all had a slightly odd look to it as well.  And, quite frankly, the less said about the flying fish and the giant crabs that might have come straight out of a B-movie the better.  It was only truly effective during Bess's delirium.

On the plus side, it must be noted that this was, for all the excess of bells and whistles, a fairly straight up production and didn't mess about with the text.  Yet it seemed to be trying too hard, with the ultimate effect that it packed less of a punch and proved less satisfying than it otherwise might.

It ran close to three and a half hours with just a single interval stuck in the middle of act two (﻿actually splitting the action where they did was pretty effective dramatically).  In the uncomfortable upper circle seats, I would have been glad of a second.  One final note, I'm not sure if the Festival Theatre has a new front of house team, but their old habit of showing in latecomers very noisily throughout the overture was not in evidence.  Long may the trend continue.