Note - this review is of the the concert broadcasts on Radio 3 and BBC 4. 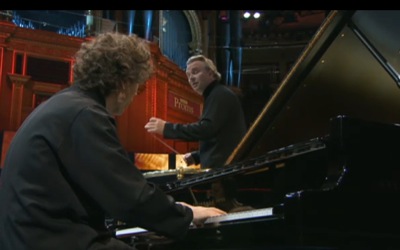 Actually, it was the fourth concerto of Lewis's survey, but the third chronologically and the third concert.  Once again the partnership between conductor, soloist and orchestra seemed natural.  However, Elder's take on Beethoven was gentler than we've had from Bělohlávek and Nelsons and the result was quite a lyrical reading.  As ever, Lewis brought both wonderful clarity and poetry.  He also brought weight and intensity, especially at the outset of the first movement cadenza, but this didn't quite sit with the general tone of the reading.  Most successful was their sublime take on the slow movement, the orchestra's beautifully soft string playing fitting perfectly with Lewis's delicate touch; the movement's main climax was especially moving.  In the finale, as in the first movement, I think I would have preferred a conductor who revelled more in the surprises Beethoven's writing holds; Elder's accompaniment was a little straight laced for my taste, albeit very well played.  As a result, it slightly took the sheen off Lewis's immaculate playing.  It's interesting the way you can throw together a soloist, a conductor and orchestra each of whom you love, and yet somehow not be entirely satisfied.  Sadly the video director from the first concert seemed to be back on duty, intent on showing us Lewis's face far more than his fingers.  The first few concerts seem to have come in rapid succession and it's a bit of a wait now until the Emperor comes in September (when Deneve and the RSNO are on duty).

They had opened the programme with more John Foulds, a composer Donald Runnicles introduced me to on Tuesday, and another work that despite having been written decades ago was also getting its Proms premiere.  Again, it was slightly difficult to hear why.  Less overtly showy than the Dynamic Triptych, it nonetheless provided a nice curtain raiser, particularly due to the many opportunities it provided to show off the Halle's glorious string sound.  From a gentle and lyrical opening it built to a suitably grand finish.

The Halle's strings once more had their chance to shine with Strauss's Ein Heldenleben, and, indeed, more than just the strings as there were some very fine textures from brass and wind too.  Now, I will confess that it isn't my favourite piece of Strauss (Eine Alpensifonie holds that honour), and for an interpretation to really get me I find there needs to be an extra something, such as the heartfelt passion Barbirolli seems to inject into every bar of his recording with the London Symphony Orchestra; alternatively, I will confess a fondness to the urgency Rattle finds in the opening portrait of the hero.  In Elder's hands, the early movements, while beautifully played, seemed a little laid back.  But later on, especially during the hero's battles, he whipped his players up into a fabulous frenzy and when the opening theme returned it was simply glorious.  This was followed by a beautiful and often tranquil reading of the hero's works for peace.  The overall effect was fairly satisfying, but for me, despite some very nice playing, no more so than in the sumptuously textured closing bars, it was all a bit too nice and slightly dull.  Soloists, such as the orchestra's leader (I presume Lyn Fletcher) acquitted themselves with distinction.