For a theatre company, Elevator Repair Service, have a slightly random name.  Still, we here at where's Runnicles are all in favour of random names.  Continuing the Americana flavour of this year's festival, this New York based ensemble had brought their adaptation of Ernest Hemmingway's The Sun Also Rises.  Running just shy of four hours with one interval it was a long slog, but ultimately well worth it. 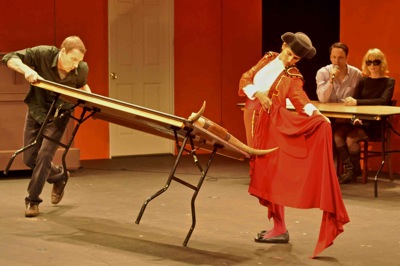 The story is that of American expatriate Jake Barnes, who works as a newspaper man in Paris, and the community of Americans and Brits who form his social circle.  Well, I say works, but to be honest there's precious little evidence of that; indeed, at one nicely judged moment in his office, his typewriter rattles on even after he has stopped miming the key presses.

The story is mostly concerned with their adventures drinking in bars and cafes of Paris, drinking some more as they travel to Pamplona, before they really go wild with the drinking at the fiesta there.  Indeed, there is so much drinking that it's a minor miracle any of the characters have a liver left by the interval, much less the end of the play.

Why ﻿therefore, you may very well be wondering, would you want to sit through nigh on four hours of watching people get drunk?  Well, the short answer is because it is phenomenally compelling and very stylish in the way it's told.

And yet, these are not totally unsympathetic characters - Cohn (Matt Tierney) has been horribly henpecked by his wife (a nicely caricatured performance by Kate Scelsa); Jake is unable to act on his love for Brett (Lucy Taylor) due to an unspecified war wound; finally, Brett herself, amid all her role as a femme fatale, so conveys the damage that has made her this way, whatever it may be, that one cannot help feeling for her.

It is cleverly done too.  The simple set, a universal cafe/bar, the walls lined with bottles, the tables with half-filled glasses containing alcoholic liquids of various colours, manages to effectively double as apartments, hotel rooms and offices, not to mention rivers and even a bullfighting arena, so sufficiently do the cast sell their performances.

﻿And it is a powerhouse performance from the cast, headed by a superb Mike Iverson as Jake, a part he plays with a fine dry wit, not to mention his sheer feat of memory given the character is also the narrator.  But the ensemble as a whole is very tight, which helps make it so compelling to watch, the actors in the smaller roles endlessly and seemingly effortlessly doubling up.

Some of the touches could irritate.  Indeed, initially the practice of Jake following lines with "I said" seems a complete waste of time.  And yet somehow it isn't; it contributes to the style of the piece: they seem to have captured the feel and the meter of Hemmingway and the period.  So too the way the characters often sit spaced out when they are meant to be at the same table, doubtless signifying the emotional distance between them.  This never feels awkward or contrived as it so easily could.

The atmosphere is heightened by the use of sound, impressively operated by the cast themselves.  Sometimes the effect is a little comic, such as the constant smashing of glasses or the pouring of drinks (despite that for the most part actual drink isn't being poured).  Yet it seems to aptly underscore the lives of these characters, providing a fitting soundtrack.  In those moments when they're sitting apart together, the clink of glasses reminds us of this.

Then there is the movement.  According to the programme note, choreography is something of a speciality for the ensemble, and so it seemed, first in a frenetic dance in a Paris bar that was exhausting just to watch, and then in a stunning sequence, which grew out of a church service and vividly depicted the atmosphere of the fiesta in﻿ Pamplona.

The bull fight provides a thrilling climax, Barnes narrates frantically, amplified over tumult of the area, as Ben Williams charges at the matador Pedro Romero (Susie Sokol - in an interesting touch both matadors are played by women) with a table.  You might not think a bullfight could be vividly recreated on the stage of the Lyceum Theatre, but Elevator Repair Service manage it.