As is his customer, Jonathan Mills took to the stage of the Usher Hall to introduce this year's festival, an innovation I rather like, and something you'd never have caught his predecessor Brian McMaster doing.  This year's theme is, of course, New Worlds, and in particular the Americas and Australasia; perhaps because of this, his focus seemed mainly on drama, dance and opera with the superb orchestral programme getting barely a mention.

To start the festival Mills had chosen very well indeed: John Adams' oratorio El Niño.  Knowing nothing about it, you could be forgiven for expecting a piece based on global weather systems, since that is where many will know the term from.  Actually, though, it's Spanish for "the boy", in this case Christ (the meteorological phenomenon shares the name as it usually manifests around Christmas). 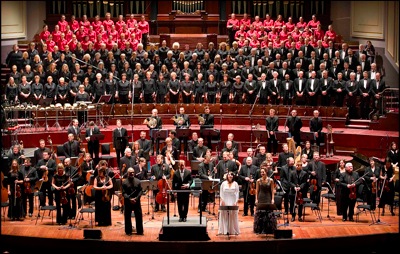 Stylistically it is much as one would expect from Adams, with claustrophobic and often repetitive rhythms.  The results were compelling.  Time and again I heard shades of his Dr Atomic, especially the music in the lead up to the detonation of the first bomb.  Adams provided some great touches, such as the use of three countertenors together to voice the angels.  He had also chosen his settings well, mixing biblical texts with more modern pieces based on the bible.  Only the section concerning Joseph's reaction to who the father might be left me unconvinced, but then that aspect of the story never does.

﻿While the first half of the oratorio seemed more introspect, the second was often searingly dramatic, such as the setting of Woe unto them that call evil good or during Herod's slaughter of the children.

﻿There was some electronic augmentation going on, but actually quite sparing by Adams' standards, and at times it wasn't altogether obvious where the electrics began and the acoustic ended.  The blulk of the work was done, and done superbly, by the BBC Scottish Symphony Orchestra.  Under the baton of conductor James Conlon their playing was exceptional, not least the tones and textures emanating from the strings.  ﻿His style was quite rigid, beating clearly and mechanically almost, but this seemed to serve Adams' music extremely well.

Amongst the soloists, Willard White's big voice easily filled the Usher Hall and made for a commanding stage presence; that said, age is catching up with him, and while the power still exists there is not always the subtlety there might be.  Perhaps most impressive was mezzo-soprano Kelly O'Connor who sang absolutely beautifully.  Adams mixed and matched the vocal parts, meaning that at times O'Connor voiced Mary, but at others the role fell to soprano Jessica Rivera (a solid performance rather than a great one).  As a result, even though most of the singing was in English and diction generally good, I was glad the text was provided.

The trio of countertenors (Robin Blaze, Paul Flight and William Purefoy) were for the most part extremely fine, both as Gabriel but also later as the three wise men.  One was slightly weaker than the other two, but their combined effect was excellent.

Behind all this the Festival Chorus proved weighty and richly textured, at times almost elemental in their power, yet at other times they sang with wonderful delicacy.  More and more it seems the appointment of Christopher Bell as their chorus master in 2007 was an extremely good choice.  They were joined in the final moments by the National Youth Choir of Scotland, who sang so well in Gerontius at the end of last festival, who provided the final layer of icing on the cake.

It was both powerful and compelling and if the rest of the festival lives up to this high standard, it could be a vintage year.  It also served as a reminder of how long it's been (a good five years) since we last had a large scale work by Adams at the festival.  Then it was The Death of Klinghoffer; let's hope we don't have to wait so long for the next.  Then again, Adams isn't to all tastes - the man next to me somehow managed to fall asleep!

You LIKED Mills patronisingly addressing we the converted and boring us with his adverts and appalling humour like a schoolteacher from a script on a music stand? Wow! You didnt get the understated beauty of Rivera and you didnt get the words? Perhaps its time for a visit to. a. a hearing specialist and b. other artistic events!!!

Thanks for your concern, but my hearing is excellent.

Nowhere did I say I didn't get the words, indeed, I said the texts were generally well chosen. To these ears, Rivera was unremarkable, but then that sort of thing is a matter of taste.

I don't think Mills was partronising. I like the way he wants to tie things together with a theme and such a speech adds more to the feeling of festival. He may have bored you with adverts, but he may have made others aware of things that they will now go and see - which will be a good thing since funding is tight. There was more than a murmur of interest last night at Idomeneo when he mentioned the tribute to Charles Mackerras, for example.