The A-Team, or back to the Saturday afternoons of my childhood

Daah da daah, da da dum, da da da da da daah, dah da da da dum.  If that means nothing to you, then the chances are that you should probably stop reading this review right now.  If, on the other hand, it conjures up childhood memories of huddling round the TV as the evening drew in on a Saturday and watching four implausible soldiers of fortune race around in a black van with a pointless red spoiler doing absurdly implausible things, making weapons out of farm machinery and cabbages, and generally saving the little guy, all the while evading vast numbers of military police, the thought of all of which makes you smile, then read on. 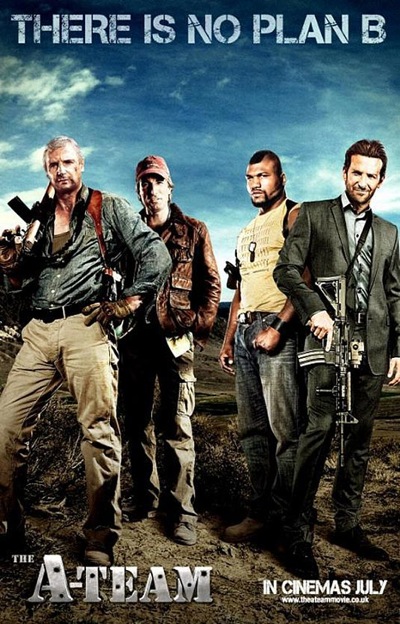 I've read various reviews slating this film, but they all seem to spectacularly miss the point.  Take, for example, the Scotsman's critic who maintained the original TV show had just one memorable character, a position somewhat undermined by the admission she'd only ever watched one episode.  The A-Team was stupid, it was mind in neutral time, sit back and enjoy the ride, and what glorious fun that ride was.  Director Joe Carnahan grasps this, and delivers a straightforward update in style.

The original crack military unit were convicted of crimes while serving in Vietnam and this is easily updated to Iraq.  Yes, the plot has been altered to revolve around stolen printing plates for $100 bills, but that is pretty similar to the original reason for their incarceration (a mission to rob the Bank of Hanoi).  The remainder of the film follows the team's efforts to clear their names.  From the opening moments, where the font on the screen is the same one from all those years ago, it is clear that we are in safe hands.

Actually, in a lot of ways it feels like the pilot episode we never got - the series pretty much jumped straight in and a lot of the back story was only told at the start of the final season.  Here we see the characters meet for the first time, we learn the origin of B.A.'s fear of flying (which is nicely maintained, along with tricks for getting him onto planes) and his reaction when he wakes up in unexpected locations (especially the plummeting tank).

The action set pieces are of a good standard, and a lot of fun, amongst the highlights are the aforementioned tank (not least for the commentary from those trying to stop the A-Team) and the initial theft of the printing plates.  The execution of the prison breaks is inspired, especially the one involving the film projector and the 3-D glasses (I shall say no more, lest I spoil it for you).  In a lovely touch, what seems to be mere fooling around as Face explains the final mission, actually turns out to be integral to the plan.  The CGI is generally fairly solid, though at times the effects are a little obviously fake.

All the elements we know at love are there, such as the team bodging together everything they need, not to mention their talent for spraying bullets with wild abandon without actually killing very many people.  The wisecracking and one liners are of a good standard.

Of the performances, Bradley Cooper, as Lieutenant Templeton "Faceman" Peck stands out.  Indeed, he alone possibly eclipses his predecessor, Dirk Benedict - the scenes in prison, where he has managed to blag the most outrageously easy lifestyle, are a joy.  Sharlto Copley runs him a close second as H. M. "Howling Mad" Murdock, the team's insane yet genius pilot, certainly colourful but never quite so convincingly mad as Dwight Schultz was.  Liam Neeson has bulked up impressively for the role of John "Hannibal" Smith and certainly looks the part, but he doesn't quite have the same command in the role as George Peppard, the Irish accent also feels a little out of place.  Least successful is Quinton 'Rampage' Jackson as B. A. "Bad Attitude" Baracus (who, incidentally, gets called by his first name far too much).  The producers seem to have followed the logic that Mr T was a professional wrestler, therefore his successor must also be.  For the most part he is simply rather dull, his temper doesn't feel nearly excitable enough and he just doesn't have much screen presence.  He isn't helped by a subplot wherein he flirts with non-violence: we haven't come to the film for an essay on man's conflicted nature, we've come to watch cars roll over, tanks fall out of aeroplanes, and things explode in bigger balls of fire than physics would normally allow for.

﻿﻿The romantic subplot between Face and one of the people chasing them (Jessica Biel's Captain/Lieutenant Sosa) feels a little tacked on, in the 'this is a Hollywood film so we must have one' sense.  On the other hand, Patrick Wilson's Lynch (a reinvention one of the team's early antagonists) is a joy, wonderfully mixing slick overconfidence with incompetence.

In short, it's an awful lot of fun, often laugh out loud funny.  Certainly, it's  not a great film: the plot won't tax your mind, there are no surprising twists and turns, no scenes to bring a tear to your eye, the writers do not have Aaron Sorkin's way with words and Liam Neeson's performance here isn't his performance from Schindler's List.  But none of that matters and none of it means it isn't two hours of very enjoyable entertainment and it's never dull.

Many catchphrases are either related or nicely referenced, though I can't help feeling the ending (left suitably open for a sequel) missed a trick, with a clunkily abridged version of the opening narration of the TV.  I know I wanted to hear it in full, I'm sure everyone else who remembered the original did too.  It would have been just right, so here it is:

One final note - do stay for the end credits to catch the cameos from Benedict and Schultz.