Sherlock - A Study in Pink (Or, damn it if Steven Moffat hasn't gone and done it again)

I go to a fair bit of opera and often directors choose to update a classic story to a more modern setting. The upshot of this is that you can't be too surprised when Wagner's Valkyries end up looking like they've been riding motorbikes round the battlefields rather than horses. The downside is that you can all too often find yourself wondering what on earth Handel's Orlando is doing standing stark naked in what looks an awful lot like the holodeck of the starship Enterprise (the one on the NCC-1701-D for readers of a geeky persuasion). 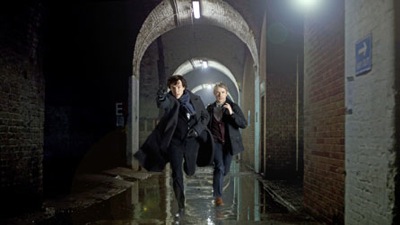 I mention this because the directors who fall into the second camp could learn an awful lot from Steven Moffat and Mark Gatiss's Sherlock. At first glance there's a lot to make a fan of Holmes nervous: the action has been relocated to the present day and the title tells us that we're getting an original story rather than a straight adaptation. But right from the outset it is clear that this is the work of fans, lovingly updating the original tales while keeping a tight grip on their spirit, with the result that, despite all the many differences, this is arguably the most faithful screen adaptation I have ever seen.

The title, A Study in Pink, is an obvious play on that of the first novel, A Study in Scarlet, and many of the details are shared - Watson remains an army doctor, invalided home from Afghanistan with an injured leg (conveniently there was a war there in Conan Doyle's time too); Watson's diary is reborn as a blog; there is a mysterious death, the word "rache" at the crime scene; poison pills feature prominently; Watson's trusty service revolver makes an appearance; there is implied drug use and a form of the 'three pipe problem'; Holmes and Watson meet looking for flatmates, the former making his deductions based on the latter's mobile phone rather than his pocket watch, and so on. Yet the core plot is new, a series of unexplained yet connected suicides; gone is the two part narrative, the second half set among Mormons in Utah (no bad thing, since in the book this lopsided structure doesn't entirely work).

And yet, Moffat clearly knows that many in the audience will be thinking exactly these things, and seems to enjoy the chance to toy with the viewer's expectations. A key point in the original narrative is the meaning of "rache": is it the beginning of Rachel or the German word for revenge?  Is the explanation the same this time?  Having dozens of stories to chose from, they've lifted from elsewhere in the canon too: ﻿the wonderful texts of "Come at once if convenient." and, "If inconvenient come all the same." which summon Watson at one point are lifted from The Creeping Man.

But what makes it faithful more than anything is the characterisation of the leads, both in the writing and the performances of Benedict Cumberbatch and Martin Freeman the show absolutely nails them.  There is the introduction of Holmes, pulverising a corpse with a riding crop to observe the resultant bruising (and totally oblivious to the woman in the room), there is the immediate chemisty with Watson and loyalty he shows to someone he as yet barely knows.

If Cumberbatch﻿ is a good Holmes, Freeman is arguably the best Watson I've ever seen on screen. There is no trace of Nigel Bruce's buffoonery, instead there's an intelligence, a loyalty, a quiet determination. ﻿ Sherlock shows us absolutely clearly why Watson falls in with Holmes - he misses the action. While Guy Ritchie's recent film made a reasonable stab in this direction, it could be said to be over the top, which isn't a charge that can be levelled of these performances.  Similarly, Moffat and Gatiss haven't felt the need to introduce a love interest. There's a fine scene where the topic comes up briefly and Holmes says "Not really my area." Here is a man married to his work.

And the ego is there too - there is a wonderful moment, as Holmes reels off his deductions, where Watson reacts with expressions of astonishment and amazement. "You do realise you're actually saying that?" says Holmes. But when Watson apologies, Holmes encourages him to continue.

There are other wonderful touches too, such as Holmes messing with the police, texting journalists during their press conference. Gatiss and Moffat have spotted that there was no shortage of humour in the books and capture that aspect well. The relationship with the police is just right too - contempt on both sides with Holmes only telling the police what it suits him to (and at times withholding important information). In Holmes's case this is driven by his sense of his obvious superiority; for the police, out of the bitterness of having to ask his assistance and a belief that there's a dangerous individual lurking within. While it's never quite stated in the books as blatantly as that, Conan Doyle reminds us several times that had Holmes chosen crime he would have been a terror.

Then there are the innovations in filming. Holmes was always sending cables, the contents of which Conan Doyle often withheld, so as to ramp up tension. Here he texts compulsively, yet rather than using the old standby of showing a closeup of the phone, the words are superimposed on the screen - it is inspired and it makes the phone closeup feel very lazy in comparison. This is further developed by flashing up the deductions that Holmes is picking up, such as where the victim's clothing is damp or the condition of the jewellery. Similarly, during a breathless chase through London, Holmes's unmatched knowledge of the streets and back alleys of the capital is nicely illustrated by superimposed maps and flashes of traffic lights and diversions.

If we're going to nitpick, it must be said that there are more ingenious plots. While the key question of how a serial killer is managing to get their victims to commit suicide is nicely intriguing, it isn't quite up there with the greatest stories. Furthermore, during the key scene where Holmes figures it out, it's hard to see why Watson and the police don't also reach the same conclusion, so glaring is the clue. There are also moments where one of Holmes's finest lines, oft repeated to Watson, "You see but you do not observe." is notable in its absence and would fit better than the out and out derision of everyone else in the room. But it must be noted that Conan Doyle was often concerned with drama and adventure as much as he was with ingenuity and there is no shortage of these components. The finale is wonderfully set up by means of a well chosen location; it also plays well on what really drives Holmes, even more than getting the bad guy: answering the riddle.

Moriarty looms on the horizon, and is doubtless what we're building to. Indeed, if there's an aspect where things aren't faithful it's this prominence (Mrs Hudson also features a little too heavily), but amid all the pluses it can certainly be forgiven. The other big change, and one which feels slightly jarring having read all the books earlier this year, is that Holmes and Watson call each other John and Sherlock; of course, how could they not in this day and age.

Ultimately, though, this is stylishly written, filmed and acted, the plot driving along with plenty of momentum and leaving you hungry for more when it ends, and that ending ties most things up while leaving a few questions to percolate in your head. Moffat has already rejuvenated the Dr Who franchise this year, replacing the Russell T Davies soap opera with strong stories and dialogue that not only doesn't make you cringe but is actually superb, not to mention penning some stonking plot twists. He performs a similar trick here.

I think Jessica Duchen on twitter perhaps said it best:


Great script! What fun it must have been to think up & create. Wish I could have written it.

To my mind that's the highest compliment a writer can pay (the other end of the spectrum from watching something, cringing and thinking of all the ways you could have done it better). It's been a long while since a British TV drama last provoked that response in me. Personally I can't wait for the next two instalments. It just seems a pity the BBC didn't commission a longer series.

In the meantime it seems fitting to give Moffat and Gatiss one of our irregular awards. I therefore present the Steven Moffat and Mark Gatiss (Opera Directors Take Note) Award for Updating and Reinventing a Classic Story With Incredible Style While Remaining Utterly Faithful to the Spirit of the Original.
Posted by Tam Pollard at 02:01