I wanted to wait until my brother had been able to post his thoughts and feelings about the passing of the great Charles Mackerras as he has a far deeper knowledge of the range of Mackerras's music making than I.  But I did want to record three Mackerras memories by way of a coda.

I was lucky enough to be living in Edinburgh for many of the years when Mackerras was giving annual performances at the Festival.  When I first moved to Edinburgh I was a regular opera-goer but made only occasional visits to the concert hall so that I was unfamiliar with what much of even the standard orchestral repertoire.  This the International Festival quickly began to change, and Mackerras's performances were a big factor in that, in particular his symphonic cycles with the Scottish Chamber Orchestra.  Others will inevitably cite the famous Beethoven cycle in 2006, and of course that was very special.  But what really lives on for me is his Brahms cycle which included the two piano concertos from the incomparable Christian Zacharias.  It was the first time I had heard the four symphonies, and I have never forgotten the experience of the First.  This is a piece that struggles and wrestles before winning through to victory in the final moments of the fourth movement.  Mackerras built the tension up and up until that moment of victory in an utterly overpowering way.

Mackerras could also provide a wonderful tonic.  One year at the Festival I subjected myself to an eleven hour French play of typical EIF tedium.  The next day I had tickets for Charles Mackerras, the Scottish Chamber Orchestra, Barbara Frittoli and Anna Caterina Antonacci in Donizetti's Maria Stuarda.  Now I don't usually like Donizetti but the playing was so invigorating, the divas were so amazing, that I was just swept along.  At the interval I got chatting to a fellow audience member, discovering that she too had suffered through the eleven hour French play, and that the Donizetti was inspiring in us the same reaction. 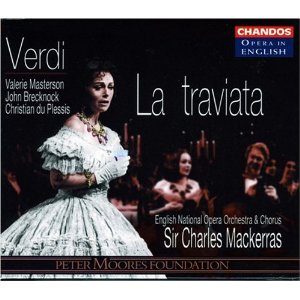 Finally, Charles Mackerras is also the conductor of the recording that introduced me to the world of opera.  I have read some critics in the past who complain that Italian opera in particular doesn't work when sung in English, and some of the tributes in the last week have suggested that Mackerras was not really at home in Verdi.  But his recording of La Traviata (now on the Chandos Opera in English label) with English National Opera is still the greatest recording of that opera for me.  The combination of Mackerras's sense of the dramatic and the greater punch that I still think that drama has when it is delivered in one's native language makes for an enormously powerful listening experience.  I know the recording so well that often in live performances sung in Italian, I find I can hear Valerie Masterson's particular inflexion, and Charles Mackerras's accompaniment in my head.  It has greatly surprised me that in all the many obituaries and tribute pieces and lists of favourite Mackerras discs, I have not seen this mentioned even once.  It deserves to be.