Proms 2010 - Mahler 8 from Bělohlávek and the BBC Symphony Orchestra

It was, perhaps, the obvious choice to open the 2010 Proms in this double anniversary year for Gustav Mahler.  There is nothing, anywhere in the repertoire quite like his 8th symphony:  epic scale, both in orchestration but also the somewhat disparate nature of the two halves, the second of which can, in the wrong hands, prove a little sprawling.  Jiří Bělohlávek didn't win me over the last time I heard him in Mahler (a performance of the 9th symphony with the RSNO at the 2005 Edinburgh festival). 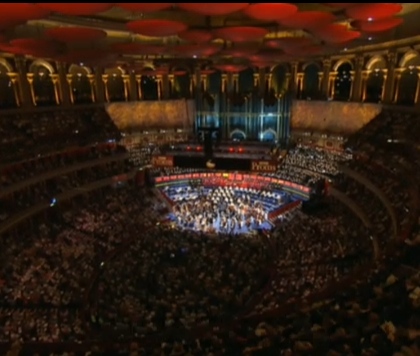 His take on the 8th was a big improvement, yet not without a few flaws.  I always feel that the opening bars of the work are almost the musical equivalent of making you feel like you've been hit by a train (in a good way, if that makes any kind of sense), yet under Bělohlávek﻿ they didn't have quite that impact.  Having said that, he built the drama as the first part progress and worked his forces into to an awesome climax (one I can't wait to hear in the flesh in Edinburgh in a month and a half).  In addition, while this work is most famous for its titanic moments, it does contain some quieter passages of incredible beauty, and Bělohlávek generally﻿ brought these out well.﻿

The singing of the soloists was solid enough, but nothing that quite wandered into the realms of breathtaking or outstanding.  The amalgamated chorus came together very well, providing a rich and weighty sound; they also impressed in the quieter moments, providing a fabulous sort of heavy piano. The boys' chorus was especially fine.

Bělohlávek held the tension reasonably well over the second part.  Yet here, quality of singing was slightly more of an issue.  Not the chorus, or rather choruses (the evening had singers drawn from St Paul's Cathedral, Westminster Abbey, Westminster Cathedral, the BBC Symphony Chorus, the Crouch End Festival Chorus and the Sydney Festival Chorus).  The problem was more with soloists.  I didn't warm to baritone Hanno Muller-Brachmann's tone at all and he was not alone; mezzo Stephanie Blythe aside, nobody really grabbed me.  I would also have liked to have the singers a little more prominently balanced.  In what seemed to be a BBC 2 balance issue, Stefan Vinke was underwhelming yet somehow, at the same time, rather shouty.  Interestingly, the balance seemed fine on the Radio 3 stream.﻿﻿﻿

The playing of the BBC Symphony Orchestra, who, as ever, will be earning their salaries over the coming months with their 11 varied programmes, was of a generally high standard.  True, there were a couple of obviously fluffed brass notes, including some from the principal trumpet at the very moment the video director chose him for a close up.  Unfortunately, there were slightly more rough edges in the second part, and even allowing for the challenges of performing of such a vast work live, they were a few too many.

It was great to hear so much from the Voice of Jupiter, or the Royal Albert Hall organ as it is more generally known, the 8th providing an ample workout for its vast pipes and wonderfully rich sound.

All in all, it felt like a solid start to the 2010 Proms and a decent realisation of a tricky piece to pull off rather than a revelation.  Of course, the view from the floor, or rather, from the tweets of people who were actually there, seemed rather more of a rave.  It is almost certainly the case that the piece packed a much greater punch in the hall than was conveyed in broadcast, with doubtless people able to fully feel the presence of the more than 500 musicians present - certainly this is the sort of work that is always tricky to realise on broadcast or recording.﻿

The presentation on BBC 2 wasn't too annoying, something that hasn't always been true in the past few years, and there was no sign of Alan Titchmarsh.  Sadly, during the break between movements, Katie Derham was unable to leave even a few moments of dead air and insisted on talking over it (on Radio 3 they knew better, and given we had pictures of the hall to look at it was hardly necessary).  Sound quality on the BBC2 broadcast was adequate but no more, and good sound is crucial in this symphony.﻿  Having said that, it was much better on Radio 3.  The live version of iPlayer these days offers a respectable 192 AAC (as opposed to the MP2 of Freeview - a big step up) which is not at all bad, though a far cry from the 320 AAC of the Berlin Philharmonic's Digital Concert Hall.  Given the cost of providing HD video content on iPlayer, it remains a pity that Radio isn't better served.

"I would also have liked to have the singers a little more prominently balanced. In what seemed to be a BBC 2 balance issue, Stefan Vinke was underwhelming yet somehow, at the same time, rather shouty. Interestingly, the balance seemed fine on the Radio 3 stream."

Strange to review at all when not present? I guess it's as much a review of the broadcast as the event?
No chance that BBC2 used a different mix to Radio3 though. Soloists are ALWAYS mixed too high in broadcast. You lose all sense of them riding the surf of the orchestra and or choruses. The only way to hear them properly (battling the elements) is to be there. The only reason I can think of which spawns this consistent aesthetic error, on the part of the broadcasters / promoters, is the relatively large size of the soloists' fees!

I don't see that it's strange at all, since the Proms is primarily a broadcast event (or, at least, the vast majority of the Proms audience experiences them via broadcast and they're paid for by the BBC only because they're going to be broadcast). In some ways, therefore, a broadcast review is actually more relevant.

It seems likely that the more efficient codec used on Radio 3 verus BBC 2 accounts for the sonic differences, but they certainly sounded more prominent on the former (more compression on the TV broadcast could plausibly manifest as what sounds like less prominent balance).

I don't think I'd agree that soloists are always mixed too high on broadcasts.

Personal experience has shown that its phenomenally difficult to get the right spot for listening to the optimum live mix in the Royal Albert Hall. There are only a handful of spots - usually in the arena - and for a long work such a position brings with all sorts of other demands not least stamina.

To a certain extent, the review of a concert when you're not there will necessarily be defined by the broadcast - you're listening to a broadcast. However, just as there are untold numbers of reviews (ranging from good to downright bad) or recordings, the review of a broadcast concert is no less valid than one actually being there in the hall.

As it happens, my feeling on the Mahler SOAT was that at the bottom line, its programming met the core objectives laid down by Henry Wood and carried forward by the BBC. Here was a work I wasn't especially familiar with, being presented to a wide audience (the first night is always a big night and receives an impressive amount of attention). The resulting performance was surprisingly enjoyable (for me).