This is a special record for me; it is the record that won me over to this magnificent piece and convinced me of its greatness.  I had owned a recording for some years, that by John Eliot Gardiner, the Monteverdi Choir and the English Baroque Soloists.  It was part of a multi disc box containing Bach's major choral works and I'd listened to them all but the Mass never grabbed me.

Then, a couple of years ago, I put on the Gramophone cover CD.  I seem to recall the thing I wanted to listen to was Giuseppe Sinopoli's live Dresden Mahler 4.  The exert was so small it wasn't possible to judge anything and before I knew it the CD had run on to one of the most magnificent things I had ever heard.  The kind of magnificent thing where you have to stop what you're doing and are frozen to the spot.  It was the Sanctus from the B minor Mass, as played and sung by Eugen Jochum and the Choir and Symphony Orchestra of Bavarian Radio. 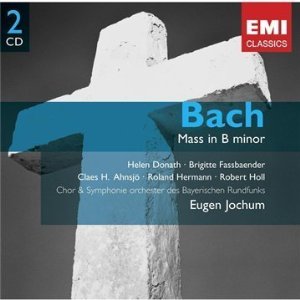 It was on the CD as the person at the back of the magazine who was picking their favourite music had mentioned it.  Actually, though, he hadn't mentioned the Jochum specifically, so perhaps that was just the favourite choice of someone at the magazine, or perhaps the mention was just edited out, or maybe it was random chance.

However it got there, there was something very special in that Sanctus.  It was the momentum, the inevitability, the immense passion, the emotional weight.  At the same time, there was the mechanical sense of structure that is so key to Bach.   Then there is the weight and quality of playing of this most fabulous of orchestras and the innate chemistry they have with their founder (and that's not to mention some pretty fine choral singing).  I'd say the track is a desert island disc for me and after listening to it there's never any doubt in my mind.  The trouble is there are an awful lot of pieces about which I could say that.

Needless to say, I rushed to Amazon and ordered the full album right away (it was, and remains, insanely cheap - an EMI double issue at well under £10).  The remainder did not disappoint.

So, why then, is it my Album of the Week.  Actually, it's really my album of last week, but with all the things competing for my attention this post didn't get finished.  But then, this series was always going to be more week-or-so than week.  Anyway, it was all Gardiner's fault.  Having been ensconced in the Aldeburgh festival for a week I hadn't had all that much time for recorded music and, what little I had been listening to isn't on Spotify - and part of the point of this is the playlist that goes with it.  Then, a week last Friday, I heard John Eliot Gardiner play the B minor, was left cold and sought solace in the Jochum recording.  After that point, what choice did I have.

If you've never listened to the B minor Mass before, for goodness sake have a listen to this.  If you've not listened to this recording before, or simply not recently, why not give it a spin.

Email ThisBlogThis!Share to TwitterShare to FacebookShare to Pinterest
Labels: Album of the Week, Tam