Note - this is a review of the concert as broadcast on Radio 3 and BBC4.

Paul Lewis's cycle of the Beethoven concerti was always set to be one of the highlights of this year's Proms, or so I reckoned in my preview, and the opening instalment didn't disappoint. 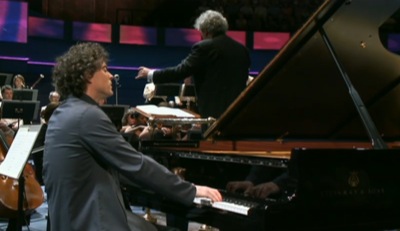 Part of an all-Beethoven night, the two concerti that featured were each preceded by an overture.  First came Egmont.  Under Bělohlávek the BBC Symphony Orchestra gave a buoyant and vibrant reading.  After a fairly muscular opening few bars they continued with a nice energy and drama which, if not quite up there with the greatest readings, was nonetheless satisfying.  True, there was a botched oboe entry in a particularly quiet solo passage, but such is live concert going - the fact that it spawned a #oboefail hashtag on twitter leaves one feeling a little sorry for the orchestra's principal, especially as it was a minor blemish that didn't really detract from an enjoyable curtain raiser.

The first concerto was much after the style of their recently released studio set (review to follow in due course), notable most of all for the fact that conductor and pianist were in perfect sync, not something that always occurs.  Bělohlávek﻿'s accompaniment was energetic and punchy, and yet always well balanced in support of Lewis.  He, in turn, played with the authority and sparkle we have come to expect and never lost his clarity no matter how rapid things got.  That said, I think I might have preferred a slightly less showy cadenza in the first movement.

The second half kicked off with the overture to The Creatures of Prometheus.  As with Egmont, this had a nice punch to the opening and was generally exciting and rhythmically driven, bouncing along nicely.

I've been a fan of Paul Lewis for some time, ever since he knocked my socks off with a reading of, among other things, Beethoven's opus 79 sonata at The Queen's Hall as part of his complete survey of the sonatas.  However, I always have a tough time enjoying 4th concerto in hands other than Wilhelm Kempff's: his was the recording that introduced me to it and he uses his own cadenza, built around a simple restatement of the main theme that to my ears works better than Beethoven's.  I mention this because nobody can be more surprised than me by what I'm about to say: this was probably the greatest performance of the concerto I've ever heard and nothing short of a revelation.  The first movement was fine enough, though I still slightly prefer Kempff's way with the solo opening and his cadenza, though the one Lewis chose did not stick out.  The movement contained all the same sparkle, lucidity, delicacy, nobility and poetry that one has come to expect.﻿  The unity of soloist, conductor and orchestra was also present, such that you couldn't have put a cigarette paper between them.  It was gently paced yet utterly compelling and there was a wit and playfulness too.  Very good indeed then, but not yet remarkable.  What put it off the charts came with the second movement.  From the quiet melancholy Lewis brought to the andante's opening bars it was clear something very special was going on here.  This was powerful underscored by Bělohlávek﻿'s﻿ heavy accompaniment - the way in which it contrasted with the solo part only heightened the emotion.  The result was at times heartbreaking.  Even in the quicker passages, which in some hands sparkle, Lewis made them feel desperately downcast.  The finale could easily and jarringly have burst in on top of this, as it would have done if they'd played it how it often is.  It didn't; instead they eased naturally and sensitively into the more upbeat section, holding back from wild abandon and instead maintaining an air of sorrow in keeping with what had come before, and marked by some particularly beautiful playing in the slower and quieter moments.  Gradually Lewis's playing began to brighten and sparkle once more towards a fabulous close.  I may one day hear it played better some day but I shall not be holding my breath.

The applause that greeted the first movements of both concertos will doubtless have riled some, but it didn't really bother me (but that's the subject for a whole other blog post).﻿  Also of note, iPlayer video sound seems to comfortably trump that of the Freeview broadcast.﻿  On the BBC 4 broadcast (iPlayer here), the cameras focussed rather too often on Lewis's face when I would have preferred to be looking at his fingerwork.