Note - this is a review of the concert broadcast via Radio 3 and BBC 4.

One potential question mark with Paul Lewis's cycle of the Beethoven piano concerti, a major feature of this year's BBC Proms, was how consistent they would be, spread as they are between four orchestras and conductors.  Thursday's second instalment suggests that there is nothing whatsoever to be concerned about, especially since, prior to the Proms, Andris Nelsons was the only one of the four with whom Lewis had yet to work.  You would not have known it from listening and watching. 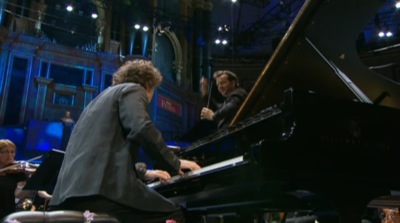 ﻿Together with the CBSO, he delivered a gentle and very well played orchestral opening to the second (or first, chronologically speaking) concerto.  Lewis sparkled from his first entry; also present was his signature clarity and a nice degree of playfulness.  Particularly memorable was his playing of the first movement cadenza which was well chosen.  There was an excellent rapport between soloist and conductor, if perhaps not quite so much as exists with Bělohlávek (but then they have collaborated intensively for the recordings).  It was a fairly straight laced reading but both beautiful and compelling.  ﻿Nelsons proved a sensitive accompanist while also showing a good feel for Beethoven, finding things he wanted to underscore in a way that occasionally called to mind Mackerras.  They rounded it off with a wonderfully punchy finale filled with lots of excitement, such that it was difficult to sit still while listening (fortunately I was listening in my living room so that wasn't a problem).﻿  ﻿Listening to the way they played it, I wondered why I always think of it as the poor cousin amongst the concerti.

On BBC 4 the clever remove controlled cameras gave a fabulous view of Lewis's fingertips and the director on this occassion thankfully chose to show us a lot more of that and less of his face.  Time and again, though, I was reminded of that magical experience, sitting in the front row of the Queen's Hall three or four years ago (for a mere £12 a concert) while he played the sonatas.

﻿The concert began a little less successfully with a performance of the overture from Wagner's early opera Rienzi.  This was well enough played, and kudos to the trumpet soloist, but despite some reasonable fireworks towards the end I find it extremely second rate Wagner which doesn't do very much for me and I'd rather have heard them in any of his other preludes.

The second half was another matter entirely.  Dvořák's 9th symphony is so overplayed that it isn't really one of my favourites.  Yet that only underscores the achievement when someone is able to make it feel fresh, as Marin Alsop did with her recent Baltimore recording and as Nelsons did on Thursday.﻿  A nice soft opening was followed by a real punch and then almost immediately by the sense that this was a reading I was going to like.  There was a wonderful sweep to Nelsons' interpretation too and plenty of fire and passion.  At the same time he brought out lots of nice details in the orchestration too.  The famous cor anglais solo in second movement was very nicely done.  Indeed, the reading was full of absolutely beautiful playing generally and some fine shimmering textures.  Nelsons also kept it very taut rhythmically, important in Dvořák, but also found a ﻿wonderful tension to the quiet couple of bars before the close.  Ultimately, there was not a hint of the routine.

A lot of gushing praise has been heaped on Nelsons lately.  This is the first time I've seen him and, albeit only via broadcast, I can see why.  There is more than a little of his mentor Maris Jansons on display, not least in the range of expression he shows and in knowing when all he needs to do is set down his baton and let the orchestra get on with it.  He is extremely dynamic and animated on the podium.  From the wide grin that's almost always present, he also seems to be having the time of his life, all of which makes him fun to watch.  A great chemistry exists between him and the players and it looks like the City of Birmingham Symphony Orchestra have once again repeated their trick of hiring a young, relatively unknown, but extremely talented conductor (and unlike last time, the media has actually noticed).  I wonder if Jonathan Mills might be persuaded to bring them to Edinburgh next year.