Deneve and the RSNO raise the bar with Romeo and Juliet

I don't always get on with Stephane Deneve (I have found his Mahler dull and he is rather too fond of talking from the podium). But when we're on the same wavelength I find him thrilling. That tends to happen when he's conducting music by French composers, never more so than in the dramatic celebration of Poulenc he conducted two years ago.

Last season, he turned his attention to Berlioz with a wonderful performance of The Damnation of Faust (which I never got round to reviewing). So his Festival appearance with Romeo and Juliet always promised to be something memorable. Neither Deneve nor the Royal Scottish National Orchestra disappointed. 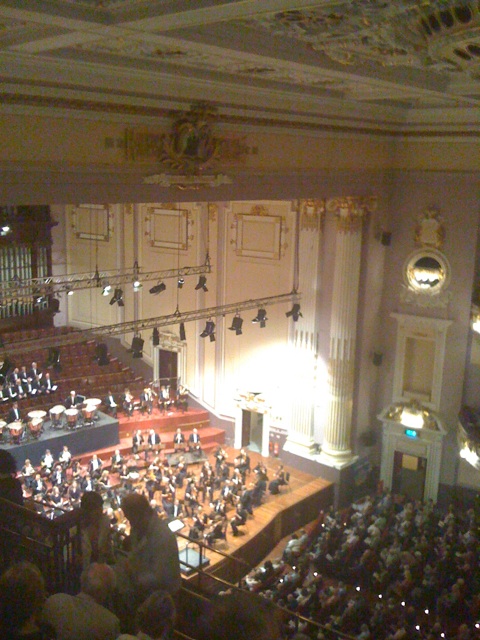 From the opening bars his interpretation overflowed drama, something so absent with Zinman last night. It's a tricky score, especially in the faster moments. Deneve drove the orchestra hard at times, and yet they never cracked under the pressure. The quality of the quiet playing was superb, utterly superior to the Tonhalle last night. Playing all round was very fine, so much so that it is difficult, and would be unfair, to single out any one section. That said, the call and response between the flute and violins that closed the funeral march was absolutely chilling.

The same flair for theatre that had the singers bowing their heads with the sound of the guillotine in the Poulenc had tenor Loic Felix leaping down between the desks of the orchestra before dashing from the stage at the end of his Queen Mab aria.

Deneve exhibited a Runnicles like (and praise here comes no higher than that) skill for placement, putting the chorus for the night scene in the foyer of the grand circle. Perhaps Deneve's been reading this site, and all the times I've raved about Runnicles putting the horn there in Mahler three. This gave a tantalising offstage effect, the more so where I was at the back of the gods as it came from beneath.

The Festival Chorus were on choir duty, with just a handful visible in the first half. We had their full force in the second. True, they may lack the finesse and the out and out quality of the SCO's singers, and their male members appear to be one of the most endangered species on the planet, but none the less, they are a force to be reckoned with and sang well, adding much to the drama of the closing movement.

It was not perfect. I was so far round that I couldn't see almost half the stage, including the spot where mezzo Patricia Bardon stood, and sang nicely from. Bass Franz Hawlata didn't quite have the power I would have ideally liked. It would also have been nice if those around me weren't quite so chatty.

Still, set against the thrilling sonic spectacle being provided, such as the four timpanists, the power of the climaxes or the emotion of other moments, such concerns were largely rendered moot. Indeed, this is comfortably the highlight of my International Festival so far and will take some beating.

Deneve acquitted himself as marvellously as we have come to expect on home territory, making me think what a fine opening concert the Berlioz Grande Messe des Morts would make in his hands.
Posted by Tam Pollard at 01:04