After yesterday's marathon of novelty, the Ears have had a less eventful day today.

To accompany them to the venue they had, once again, last week's Economist (which is now scarily close to becoming two weeks ago's).

There was no listening at the venue, not least because we didn't stump up for the licence for any form of background music outside of the theatre (interestingly, some kid dashed in to check we were displaying the PRS poster that was part of the deal - I'll charitably assume he was making some game of it and that PRS hasn't stooped to child labour).

After my shift I popped into the our theatre to see Cygnet Training Theatre's The Tempest. They delivered a lesson in giving Shakespearean dialogue and provided an interesting modern interpretation which wasn't too in your face. My main complaint, though, as is too often the case (and why I mention it here), was the noise of the storm meant the opening passages were lost to the Ears. Since they're high amongst my favourite lines of Shakespeare that's a shame (and pointless, since they convey the elements better than any sound effect). 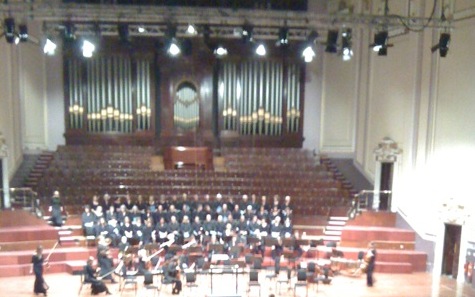 Later in the evening it was off to the Usher Hall for Walker and the Scottish Chamber Orchestra (see review here) for a programme of Hadyn's 70th symphony, Battistelli's Fair is foul, foul is fair and Haydn's Last Seven Words of our Saviour from the Cross.

Then home, and time for some iPlayer. Of course, it had to be Donald Runnicles' prom with the BBC Scottish Symphony Orchestra from earlier in the evening (listen here) featuring Adams' Slonimsky's Earbox, which they played back in February, Mozart's K466 piano concerto with Shai Wosner and Strauss's Symphonia Domestica.

Then it was time for bed (actually, since I have a job interview in the morning, it was probably past time for bed!).
Posted by Tam Pollard at 00:33

Forgot to add, somewhere in there, I also did a bit of comparison of various Linn Records samples of the Mackerras/Pizarro/SCO emperor concerto at different bit and data rates (sadly my mac doesn't like the highest quality one):