Okay, before I go on, I must stress that whatever problems I'm about to describe are small potatoes when set next to last year's, what's the right word, fiasco, catastrophe, inability to organise a piss-up in a brewery, [insert hyperbole of choice here]. That said, they are both real and present and the Fringe is basically hunkered down and in denial over them.

I find this particularly upsetting. Aside from my day job, and this website, I work as a volunteer and one the venue managers at Venue 40. Amid last year's chaos the most depressing thing was the lack of any kind of information from the Fringe. Indeed, my only updates came from a chance meeting with an acquaintance who worked at Underbelly (who, since the software they and the other big venues used was drafted in to salvage things, was more in the know).

Everyone makes mistakes, but basic failures of communication make it that much harder for us to deliver a satisfactory service to the customer. Doubtless they hope that these matters will escape the damaging press coverage of the past. However, such an approach is, in my view, hopelessly misguided and short sighted.

There are, then, two problems that I am aware of. The first came to my attention yesterday afternoon when someone came up to our box office to express concern that a ticket purchased for our venue (which is on Victoria Terrace) said 140 The Pleasance, a good long twenty minute walk away (picture below - the address is inbetween the venue name and the name of the theatre space): 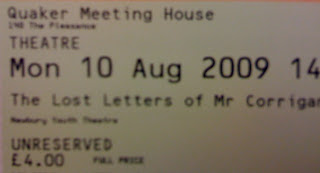 That put us on guard and more tickets followed with such addresses and Nicholson Street and Hanover Street (and not just for that one show). Most tickets, however, had nothing in this space and none had our correct address. Was this a glitch, were these tickets somehow faked? We simply didn't know. Phoning the box office was a lost cause, we faxed a sample and received no response. Finally today, one of my colleagues, after visiting both Fringe Central and then the main Fringe office, got an answer: that there had been a problem (now corrected) affecting tickets sold before a certain date, causing some to have the wrong address. Why then, have we not put out a release advising people to check their tickets and avoid missing a show? Why not inform venue managers? There is no good reason.

The second problem actually came to my attention first, but I thought it was just a one off: someone came into the venue to collect a ticket booked through the Fringe (something we have no facility to do). However, I am now informed that the Fringe's guidance when tickets are purchased online is not clear in this regard: i.e. not stating that tickets need to be collected from the Fringe and that this has already caused problems elsewhere. Again, this is a simply addressed problem and one which denial doesn't help.

Given the queues at the Fringe, which were crazy this afternoon, anyone wanting to see a Venue 40 show should contact us direct and I suspect that's good advice in general (we don't charge a booking fee either - on the show I was booking for it worked out over 10%, which is the more outrageous when you remember they already take a cut of the ticket price). You would also be well advised to double check where a venue is, if you don't know, and not go by any address that is printed on the ticket.

My reason then for writing this is twofold - to advise customers to take care, and to plead with the Fringe that this approach simply is not good enough: everyone makes mistakes but you have to communicate better with the general public and with the venues (it isn't rocket science).
Posted by Tam Pollard at 19:08