The Ears a fairly busy Monday (I'm technically on holiday this week, and wasn't needed at the venue until 6pm). Things got off to a somewhat atypical start: 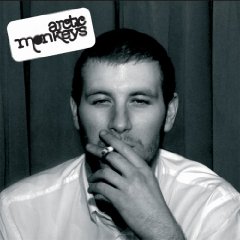 I've been meaning to listen to something by the Arctic Monkeys for ages but have repeatedly failed to get round to it. Annoyingly Spotify let me down (in that when you try to play the debut album Whatever People Say I Am, That's What I'm Not, you get a message that it isn't available at the request of the artists). Fortunately, it is on the rival service We7.

It's good. Very listenable, though after a while it does seem a little samey overall. I'm not sure they deserve the reputation they have managed to acquire. Certainly, I've heard a lot of much better rock music over the years.

After that it was time for something completely different:

Cabin Pressure is a rather fine Radio 4 comedy (and the last episode of the current series will be on the iPlayer until Friday). It charts the adventures of a somewhat shambolic charter airline with an inept captain, know-it-all first officer, mind-bogglingly stupid flight attendant and exasperated manager. Well worth a listen - it's baffling that this goes out in the daytime slot when so much junk gets put on in the 6.30 prime time period (the less said about Down the Line the better).

Then, to accompany me on a brief trip to the supermarket:

Once again the audio edition of the Economist (still a week or so behind).

I still had a couple of hours to kill before the venue so I thought I'd investigate the Berlin Philharmonic's Digital Concert Hall a little more closely. Now, in the past I've steered clear because the price (€9.90 per concert or nearly €150 for a season pass) seemed pretty steep. However, this tour did leave me wanting a little more. Still, I had a conundrum: if it wasn't worth it I didn't really want to spend €150 and if it was, I didn't want to spend €9.90 just to be sure and then have to spend €150 on top of that. What's needed is proper free trail of, say, one concert or even just one work. Fortunately, via Gramophone, there is one (the article gives a discount code that gives you access to one concert of your choice from the archive for free). However, the orchestra would be sensible to offer this as standard.

So, after a little browsing, I selected this concert, not least as the prospect of Christine Brewer singing Wagner is always appealing.

Picture quality is pretty good (though I'm not sure the link from my Macbook to my TV is quite good enough to really exploit it). Sound is good too, though at 320kbps not quite CD quality which is a shame. That said, it is massively better than what you get from a BBC Proms broadcast on the iPlayer. The interface is pretty user friendly.

What, then, of the music. Well, the programme kicked off with a new commission from Siegfried Matthus of a work for wind quintet and orchestra. This was rather fine (and interesting for the fact that Rattle himself took to the timpani to open it).

The Wagner that followed was the real treat, though. It's wonderful to hear the music played buy this superb ensemble. They worked their way through the standard Gotterdammerung chunks: the Rheinfahrt, the funeral music and immolation. However we also got Waltraute's scene with the added bonus of Karen Cargill. My only reservation was that the soprano was not, as advertised on the website, Brewer. Since I wasn't paying (and since Katarina Dalayman was a creditable replacement), I wasn't too miffed. If I'd paid €9.90 I'd be pretty cross so they ought to correct it.

So, is it worth it? For the individual concerts I'd say not (unless it's something really special). €9.90 either gets you the option to watch live or a 48 hour pass to watch an archived performance. So, the price of a CD, and then in two weeks time if you wanted to watch again, you have to pay again. You can compare to a real concert ticket, but in my view any such comparison is spurious since the two things aren't remotely comparable.

That said, in a funny way, €150 for the season pass is actually pretty fair value. You get the live concerts, you get full access to the archive (both of last year's season, and this year's as they're added) and it lasts until the 2010 season kicks off in a year's time. I think I may invest.

The ears had no company on their way to the venue. On returning home, I dipped into Furtwangler and the Berlin Philharmonic's 1949 Bruckner eight (I have two different pressings, but can't decide if they're the same performance).

I have some interesting things in store for the Ears tomorrow (but you'll just have to wait until then to find out what they are).