I didn't set out with this specific objective, but today the Ears wound up hearing lots of stuff they'd never heard before. Which is great, I love hearing new things, so three in one day is outstanding.

The first was born of necessity: 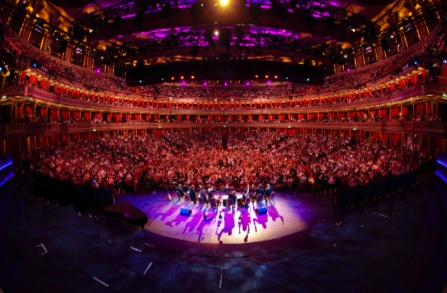 The Prom of the Ukulele Orchestra of Great Britain was due to expire on iPlayer this evening and will, by now, have done so. Pity, since it was insanely good and I would wholeheartedly recommend it.

Not only are they eight talented players, but they have a keen sense of humour too. Add to that that we got to hear what a thousand or so ukuleles playing the Ode to Joy sounded like and, well, what more could you possibly ask for.

This was followed by more from the Proms in the form of the first Prom by Barenboim and the West-Eastern Divan Orchestra. I only had time for the first half before leaving the flat: Liszt's Les Preludes and Wagner's Prelude and Liebestod from Tristan und Isolde. I heard the orchestra play the latter as an encore when they came to Edinburgh four years ago. It was quite a performance. 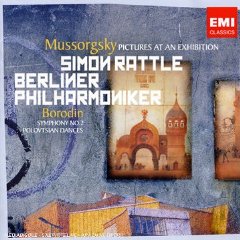 There wasn't quite time for the second half, but I did squeeze in part of Pictures at an Exhibition (orch. Ravel) by Rattle and the Berliners care of Spotify.

Then it was off to the venue accompanied once again by last week's Economist on my ipod. However, I was not there to work, rather to meet a colleague for some musical adventures.

First we headed down to the Grassmarket and to the Apex hotel (which becomes the Sweet Grassmarket venue) to hear Living Room, an ensemble based around the hang (think two woks stuck together). It was exception and one of the best musical experiences I've had in a while (review here).

Then it was off the Udderbelly to catch The Magnets, an exceptional band of a capella singers and beatboxers (review here).

Then the Ears had a bit of a rest, aside from the dialogue of Black Comedy, a rather fine farce being done by a school theatre group at my venue (with the nice device that most of the action occurs with the lights 'off', but from the perspective of the audience this is reversed).

Then it was home for some typing up of what I've heard today, and what better to accompany this than the Living Room in London CD (though first I finished off the rest of the Mussorgsky from earlier).

Just before bed, I squeezed in the second half of the Barenboim prom: Berlioz's Symphony Fantastique (and again find myself wondering when they might get round to broadcasting that stunning Runnicles performance from earlier this year).
Posted by Tam Pollard at 01:14